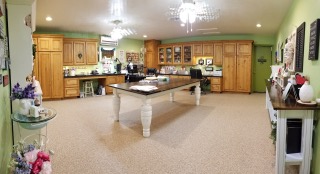 Just like I promised yesterday, I did a FaceBook Live Studio Tour. I didn't think smart with my phone direction but it worked ok, here is the video.

If you have any questions, please let me know. It has come a long way since it was a garage.

I updated from 2011 when we did the first major update. It was fun to look back on how things have changed, and what has stayed the same.

The picture shows the laundry door...that is now gone since it practically fell off the hinges...and it is heavier than heck...I was thinking how cute would it be to put an old screen door on there? 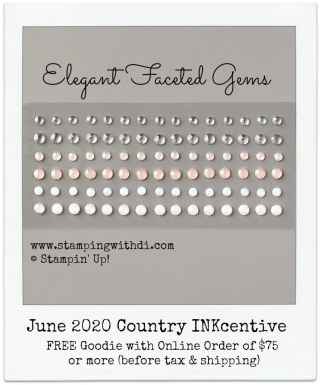 So I mentioned a couple weeks ago after Jeff finished my Country Farm Table for the studio, that he was working on project #2. Just like the table I told him what I had in mind, he took some measurements and then his brilliant mind and awesome woodworking skills made it happen. I am so blessed and lucky to have this man as my husband. He is so cute, when he comes home every day and I am in my studio working he always comes in and sees how I am doing, but now he has to rub his hands on the tables...ha!

So here are the pieces starting to get glued together. Can you figure it out? OK I just realized I put the answer in the title of the post...ha!

Well this a weird angle for the picture, but here is the what Jeff is calling a bench table. This is the base.

He did the same as he did for the farm table, he stained it first before painting it.

Here it is all painted and drying before he moved it into the studio.

So here you can see how long it is and how super cute it is. It is 9 feet by 18 inches. I let it sit a couple days before I shabby'd it up like the farm table.

So then he got working on the top, laying out the pieces. Like the farm table, lots of glueing and dowel rodding. It is basically a skinny version of the farm table top.

He has lots of clamps, that is a good thing. 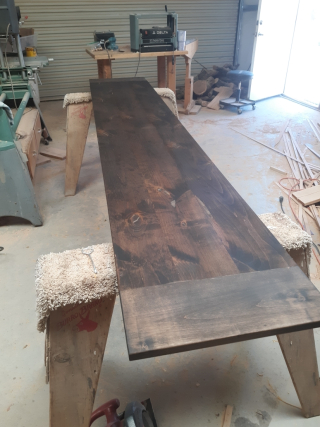 Here it is all stained and ready for the polyurethane, I love this part cause it means it will be done soon.

Then he got it all measured and put on. He used the same wooden button doohickies to install the bench table top that he did for the farm table top. I let it sit for 24 hours so it was really dry before I decorated it.

Here it is from the front. I have my light table, my postage scale and tape, envelopes, team cards/vouchers, customer post it's, inspiration binders, catalogs etc. Other stuff I use regularly hid in some cute accessories. I asked Jeff if the bench table looked too busy and he said no it's not doing anything...ha! Such humor.  I am sure like my whole studio things will get moved around over time, but for now. I am so excited and love how it turned out. I have always loved my studio but this has just finished it amazingly for how I am taking my business to be totally virtual and online.

Here you can see the two tables together, and my super cute hutch as well. I am planning to do a studio tour for my Teach Me Tuesdays FaceBook Live today so I need to bet busy and tidy up the other side behind the camera...ha! 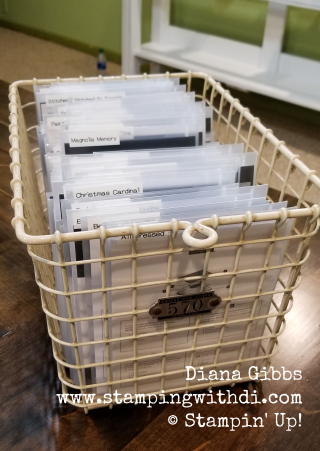 I love being organized...and sometimes I even have organized chaos...ha!

Yesterday I showed ink pads, blends etc. organization in my studio. I thought I would share how I store my dies and embossing folders. I love this big heavy wire basket, I think it is from a locker or something, I got it antiquing. I leave my dies in their original envelopes, and usually add a piece of magnet sheet, I have shown that before on my blog here. 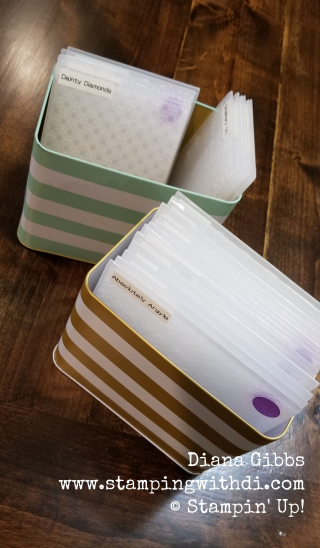 We used to have these tins in the catalog and they are great for the embossing folders. I just use a label maker to put names on everything to make it be easier to find...and they are sorted alphabetically. They fit perfectly on the shelf beside the basket. The shelf holds some of my embossing plates and other doodads.

I will share more of the studio as I get it more put back together and sorted after Jeff finishes his last project.

ROYGBIV Organization with Storage by Stampin' Up!

Every year with the beginning of a new catalog I need to re-organize my ROYGBIV pads and blends with the change of the In Colors. The cardstock I just organize alphabetically. Plus the cardstock is put away in a file cabinet and cupboard and I can't really see it anyway. But I love looking at ROYGBIV coloring tools. I think it was Granny that originally taught me about ROYGBIV, heck I even love saying it.  It stands for Red, Orange, Yellow, Green, Blue, Indigo and Violet.

I am so bad when it comes to knowing which colors are in the Color families of Stampin' Up!, cause pretty much I don't. Ha!

I love the Storage by Stampin' Up! cause it all just goes so well together, and you can arrange it any way you want really. I love the white color too because it will compliment any color home or studio. I just decorate with stuff with similar colors.  Red seems to be what I have a pop of here and there in my studio without even realizing I was doing it.

My ink pads, markers, pencil crayons and ink refills sit behind me on my cupboard. They are easy to get to when I need them. 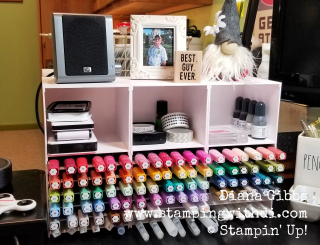 My Stampin' Blends, Memento Ink Pad and refills,Wink of Stella, Water Painters etc. and  are on my desk as I use them all. the. time! I recently did a little rearranging so I got an extra cube and lid so that my Blends were in three tiers into of 2 tall ones. I like this better and I can see over them better too.

Here is a word document I use that I print out so that I can reference back to it when I pull stuff out to stamp with and then forget where they need to go. I hope it helps.

What is your favorite arrangement?

Queen of the Country Farm Table

See what I did there? I mean I did have a beta fish called King Arthur...ha!

Jeff has been making me a couple projects for the revamped studio (I am totally online and virtual now) and the first one is done.

I just mentioned what I wanted and how much it would cost if I got one already made and he was like I can make it and he did.  My husband is the best and his mind is amazing. I took a lot of pics...sorry! I wanted to have a record of the process to look back on.

I wanted fat legs (I guess I should have been more specific..as my own personal ones are now fat...ha!) and this was Jeff doing his drawings etc.

He glued the wood together to make sure after he turned the legs they would be fat/chunky/sexy...ha!

Here he is getting ready to start. 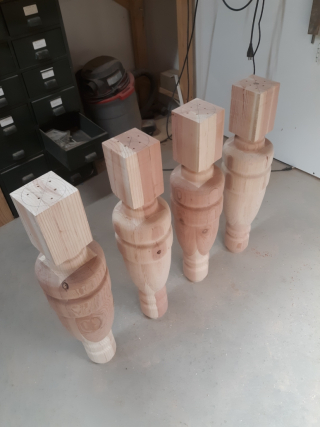 This is after they were turned...way cool right?

So after a lot of work he had the table base ready to be painted. I wanted to do it shabby chic to match the hutch.

So before he could paint to give the look after we shabby and scuffed it up, he stained it walnut. This was also the same stain he was going to use on the top. Different wood though and it took the stain way different. The base was red wood, a soft wood so it was not as hard to turn the legs. OK I say not as hard cause that is what he said...I know that turning those legs was hard. I could never have done this at all. The top is alder, a hard wood and the same wood as my cabinets in the studio.

So he took it outside and painted it antique country white something after the stain was dry.

Then Eric and Jeff carried it into the studio...eek!!! It is so heavy.  After a few days of letting it dry really good. I shabby'd up the base and legs.

Can you see the shabby? I also rubbed them with this wax stuff that I am not super sure it did anything, but I think it is more of a protectant.

So it was going to be a while before the top was made so Jeff laid a board across it so I could use it...sorta!

Then he started on the table top. A lot of glueing and racket and pinioning or something and doweling.

Lots of sanding. He has been getting a few new tools...Father's Day gifts I say. This old sander was a piece of poo, so he has a new one now.

Here is the top all stained. Now he had to put on 3 coats of polyurethane to protect it. Have I mentioned we have been having 112 degree days?

This is not sure what coat...he would sand it lightly between each one.

Then the guys carried the top in this morning, I think it is heavier than the base. Here is Jeff (the King to my Queen) measuring to get it on straight. It actually got done and in the studio one day earlier than he said.

Well, isn't it gorgeous? The table...I know my hubby is. Shhhh don't tell him.

I already have it loaded down with sale packages of retired goodies to go to new homes tomorrow.

Now he has started on project 2. Hmmmm....what will it be?

Ok enough blabbering. I gotta make the man his supper!!!