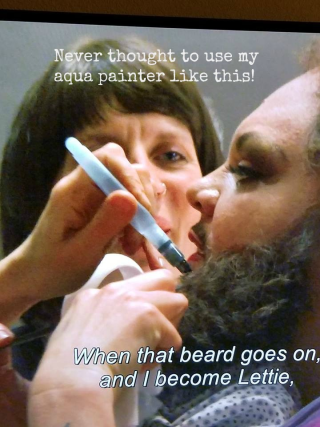 …ever used my aqua painter to attach a beard.

I have been listening to the soundtrack for the Greatest Showman for a week or so, and was so thinking it was still at the theater, was even making plans with a friend to go see it.  Then we realized it was not at the theater anymore…I wondered how people were already buying it…doh!

So I quickly went and bought it, it is selling out the Walmart guy said. I had to buy one that also included some sort of 4HD. Eventually the stars are going to be a hologram in front of you like in Star Wars.

So I watched it last night and it is amazing!  I wish I had of seen it on the big screen, I wish that the Christmas Story musical was not so horrible so that I had of watched the little sneak peek they had of this movie in it and I would have surely gone.

I can't wait to watch it again…till then it is "Alexa, play the soundtrack for The Greatest Showman" one of these times, she is going to say "again?"

After it was over I watched other things on the tape and even some YouTube stuff. I thought this was fun, when I saw the aqua painter being used to attach the bearded ladies beard.

That made me think…what have you done with a Stampin' Up! product that was not really made for that?