Well every day is great spent with my hubby but yesterday started out as a scary day, that I knew was bothering both of us but not till it was over did I realize how much as the tears wanted to flow (and I held them back) and the nausea too (held that back too.)

We got to the Banner Baywood Heart Hospital for our 1:00pm check in. 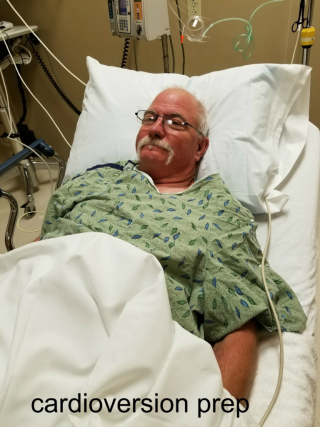 Jeff got all undressed and gowned up and they hooked him up to the heart monitor, oxygen, blood pressure, all that stuff. So when he has had his last three EKG we don't hear them the doc just looks at the print out, but this time we could actually hear the heart and I was like that sounds good to me. 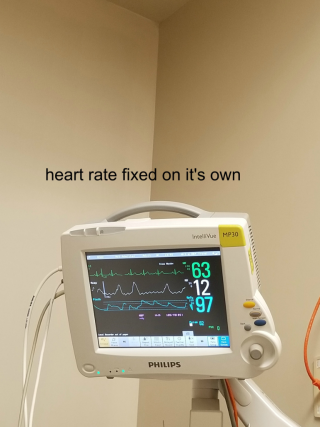 I watched the little green lines. I am not a doctor and have never played one on TV but the lines looked good too…I had no idea what the other two were. Were they trying to match the little green lines? Were the green lines the right heart rate? So then the nurse comes in and says "what are you here for?" and Jeff says "to shock my heart" and she said "well not today cause you are in sinus rhythm" and we both looked at each other and I swear I heard like those angel trumpet things that means it's a miracle. So I don't know but all I have been saying in my head was "please God let the medicine work, he is ok" over and over and over…and over.  So now I was saying "Thank you God" over and over…and over. Still saying it.

So then she called the doctor to let him know and then we waited…and waited…and waited, cause basically we had messed up the whole day's schedule I bet. I mean this was probably like 1:30 or so and we were done. So then we played Word back and forth on our phones, I facebooked to let everyone know he was good, he texted his buddy from work to say he would be in the next day, we called Mum Gibbs…and then the doctor came in and I think he was as happy as we were.  So Jeff will continue taking the meds he has been taking and we see the doc in 6 weeks, he mentioned having Jeff wear a monitor later, and I am thinking they may take Jeff off the blood thinners eventually (we hope so) not sure about the other two.

So then we waited some more while they got RX stuff done and then Jeff was deciding where we were going to eat cause he was starving.  It was probably 3:30 or so before we got out of there and he wanted Outback Steakhouse. 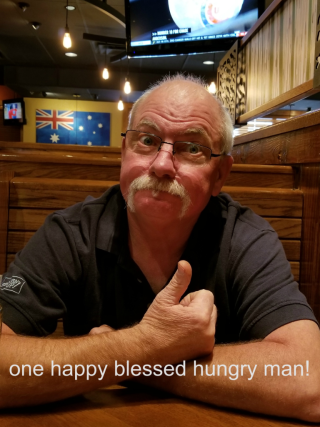 I told him let me get a picture to show everyone how great you look.  So all in all, a great day, oh a great day. It was nice getting home shortly after Eric got home from work, we have not told Eric exactly what was going on just that Dad had a doc appointment and we did not know when we would be home, so we had in place for someone to come and keep an eye on Eric, but was so awesome when I could let them know, we were good.

So now we can get back to normal….pretty much. He is all back to work, now I can really focus on my Stampin' Up! business, and fun stuff. The end of the catalog is near and so much to do, my studio looks like a tornado came through. Oh I need to holler at Barb, I can do the monthly blog hop with my team now….yay!!!!!!!!!  So two things, you would have gotten an email from me if you need to pre-order a catalog and also I have stamp club starting in May. If you did not get those emails, let me know right away!!! I will be getting the catalogs ordered the 28th!

I want to stop and thank all of you that have sent prayers and love and messages, we love you from the bottom of our hearts. God is good!  I wish I could thank everyone individual but I am afraid I would miss a comment and hurt someones feelings. So seriously thank YOU!!!

Have a blessed Friday and thanks for stopping in.