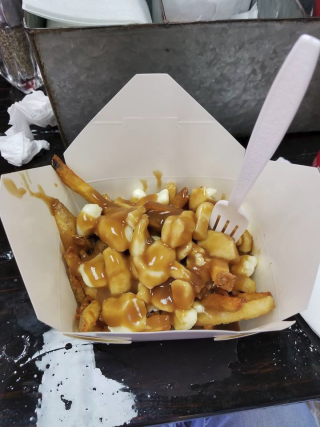 Growing up in Canada I always had fries and brown gravy for lunch in the high school cafeteria…and the odd bag of doritoes. So when I went home years later my friend Amir said I had to try Poutine.

From Wikipedia: Poutine is a Quebecois dish popular across Canada, made with French fries and cheese curds topped with a light brown gravy. This fast-food dish is typically found across Canada and in some places in the northern United States.

So I tried it and OMG! heaven. I mean I am a sucker for fries and brown gravy (I have been known to order fries and a side of brown gravy at a restaurant) but that added cheese curds was over the top.  So the last few years or so poutine has found it's way to America…ok well Arizona at least…not sure if it is cause we have a lot of Canadians that live here in the winter, or if it is found all over the other states? What say you? Have you seen Poutine on a menu near you? If you have a Red Robin the answer would be yes…but they add mushrooms.  And heavens if they try to give you breaded cheese curds just say no thank you….now that I think about it I think the Red Robin curds do have a thin breading on them…maybe since the gravy and the mushrooms are so yummy I have forgiven them…since it is yummy.

We tried a new restaurant in Queen Creek "Old Ellsworth Brewing Co." last week and they have it and you can even add different meats to it.  I prefer the original, but Jeff got his with bacon and it was good too.  When we used to go to the food trucks Friday nights (now those of you that follow me on FaceBook know we go to The Bistro Queen Creek every Friday now) there was a truck there once in a while called The American Poutine Co. Now that struck me as funny cause well poutine is Canadian…ha! But anyway any time that truck was there we would go. Well they just opened a restaurant in Gilbert. So today….long story short….too late right?  We signed the closing papers on the big  house and we celebrated by checking out The American Poutine Co. restaurant.  Yummy as ever. I also really loved the one in Queen Creek and it is closer, so will probably stick to it.

Thanks for listening…hope I didn't make you too hungry.

August Christmas Card of the Month Class – Carols of Christmas