Get a WooHoo Owl Card in the Mail

Our dear friends Teri & Julio Pazos, we have known them almost 27 years…that goes fast eh?  I used to babysit their two boys Victor (who is Eric's age) and James (although my head still says Jimmy) their youngest. James  is a baseball player. He has been in the Yankees triple AAA roster (I might be saying it wrong). So he was called up to the Yankees and is now pitching for them. He is a left handed pitcher and is so good at it. Look how handsome he is in his uniform. 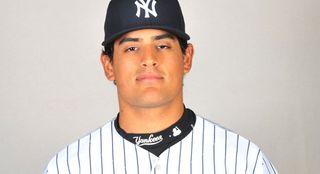 So this weekend we were all set, I had the tape dealie ready and everything.  They were playing my team the Toronto Blue Jays (I am Canadian after all)  Gee who to root for? My friend Elizabeth who is a die hard Yankees fan said "did you babysit any of the Toronto Blue Jays?" and I was like "nope!"

We watched the game on Friday and Saturday and they showed him in the bull pen and we were like oh anytime now and then they would send someone else in…I was like screaming "wrong pitcher" at the screen, Jeff just kept rolling his eyes, seemed I'd become a pro in one day of watching (I will admit I don't watch much sports…or any, so glad James plays baseball cause that is the only sport I understand most of it, and I really enjoyed it. They never heard me screamin'…or maybe they did…but then we got a storm come through and our cable went out. Then when it came back on there was a rain delay in NY and then they never came back to the game once they started playing again, so we missed James pitching…Teri said it was three up and three down….grrr…..so mad, but so proud too, I am sure there will be lots of other times to catch him on the TV. Way to go James!

Well they are playing again today so need to go see if it is on the TV, I am also having my floor re-done in my studio while I am at Founder's Circle so I have to get all the standing furniture out….holy moly!