I (Heart) Paper Pumpkin ~ Save during Sale-A-Bration

Today was my Di's Country INKers Make n Takes n Lunch. We met at Kneaders and then headed back to the studio to make some fun projects. I will show you what they did later. I am such a dork, we had so much fun I didn't take any pictures. EEK!

After everyone left Jeff helped me wrangle up the ducks so I could swim them for the second time, I wish they understood when we try to get them out of the brooder it is a good thing.  We even put water in a big plastic tub and stuck Georgette in it and I thought Edith and Phyllis would just say "oh look let's go swim". Remind me not to get chicks and ducks together again…ha!  It is hard to get just the ducks as the chicks can fly so then we had to be extra careful they didn't fly out of the brooder, did I mention there is poop on the bottom of the brooder? Ha!

So we Jeff managed to get Edith and Phyllis and then I filled the tub and we put them in there, they had much more room. 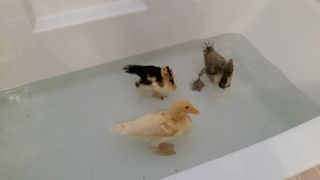 Look how much bigger they are compared to just a week ago. Georgette is starting to lighten up and you can see white feathers coming in.

So I am pretty sure that Georgette (yellow) is a Pekin 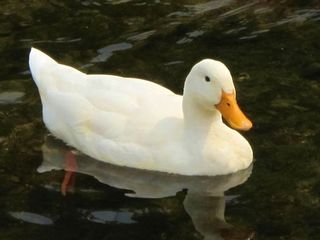 Edith (black & yellow) is a Magpie 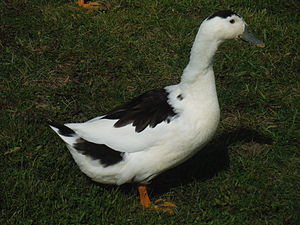 and Phyllis (gray) is a Crested Blue Swedish 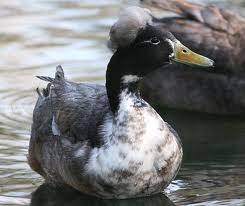 Neat eh? Will be curious to see if I am right. And OMG! remember the frizzles I wanted to get? Jeff and I drove down the street and look what one of our neighbors has? 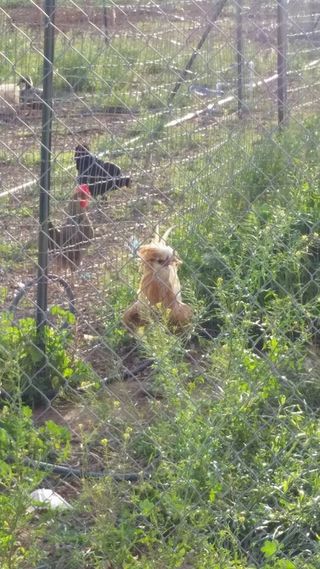 I  yelled stop the truck, it's a frizzle and seriously he looked like this. 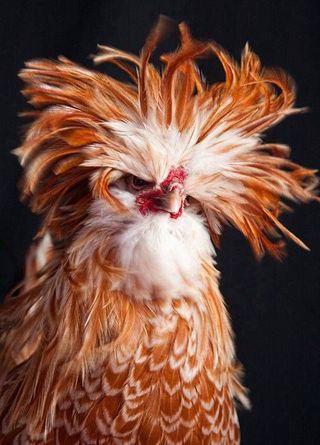 but as I got to the fence he scooted all the girls and ducks away from me so the picture was not that good.  Jeff went over and chatted a bit with them today, come to find out they are actually Polish chickens…of course this guy is a rooster…figures.  So at least I know what to order next year when I am ready for more chickens. Ha!
Jeff stopped at Home Depot on the way home from work and bought a pond liner and he is working up his design. His hand is even blurry as he feverishly works up his ideas. 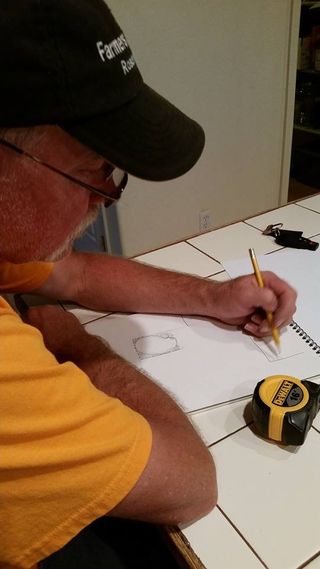 It won't be big just a 40 gallon but he wants to set it up so it will have a drain and easier to empty, clean and refill, last year with Huey and Dewey we used a kiddie pool and had to lift it up and drain it and it was heavy. Since this one will be in the run he will make it nicer with rocks and stuff.
Well this old gal is off to bed.
Have a blessed Sunday and thanks for stopping in.