Class in the Mail ~ Amazing Birthday

Eric had to go to the Doctor to get a referral so I called to make his appointment and they scheduled it the day after Christmas, it was not an emergency by no means.

So when we got to the Docs, we were in the waiting room and this odd Doctor comes out (I am personally an odd person, so I recognize it) of the backroom and goes over and makes some weird remarks to the secretary and then he punches a code in and goes in another room and comes out chewing on food…we figured Christmas cookies and the way he was acting maybe some spiked eggnog.

Jeff jokingly said "there's Eric's Doctor" and I was like "nope that is not who he sees and if they give us him we will leave".  So after a while they call us back in and then we are in the little room waiting, and oh my gosh here comes that weird Doctor.  I said Oh God under my breath.  So then he proceeds to talk like a wacko, he even leaned on the wall like he couldn't stand on his own. I guess maybe he is a Doctor that maybe works with kids so he acts like this so they are not nervous? I really have no clue, he also said that none of the regular people were there cause of the holidays. I am thinking then why did they make the appt for this day? It was not an emergency, they could have said Bill Murray was on call…cause as much as I love him as an actor and a comedian, I don't want him as the Doc of my son. So after some weird grunting noises and talking to us like we were 5, asking us questions that the answers would be in his chart…which he did not have… he said he would get the referral sent in.  I just know that I need to call when the regular people come back and find out who he was so we don't get him again. Thank you for coming in during the holiday season Dr. Murray, but I'll pass on you next time.

Today I played ketchup as a like to call it. I finished November's Mini Masterpieces. 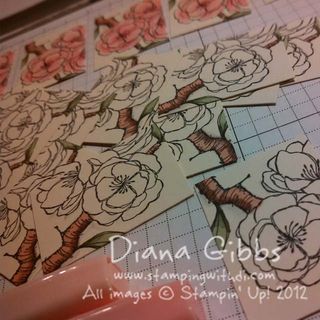