Class in the Mail – Endless Birthday Wishes – While Supplies Last

Well seems that Cogburn (the rooster that adopted us) has been going back and forth between our house and the neighbors, so the other day Jeff said "hey the ducks are drinking under the rose bushes". So I grabbed my camera. 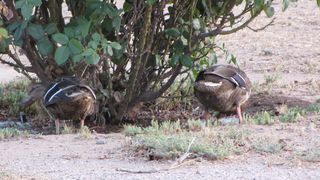 Sure enough some unfamiliar bums were pointed my way. 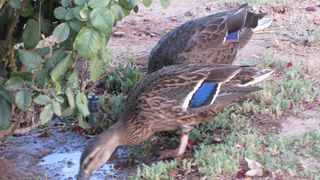 They were going to town on that water, sticking their beaks way down deep, not sure what they were hoping to find.

Well the next morning Jeff was like "hey the ducks were out here by the chickens this morning". And I was like "wow they came all the way around here?" I mean they walk slow…ha! 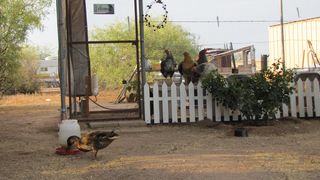 The girls hopped up on their table… 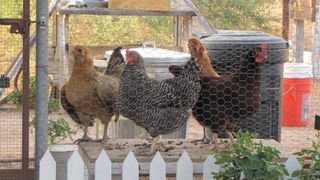 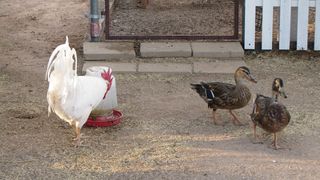 Meet Hewey & Dewey, everything has a name around here.  So I filled up an old cement mixing tray we had used for the girls with water and well… 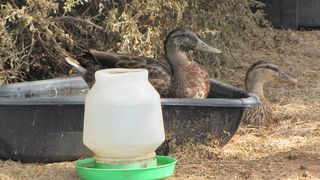 …they seem to like it.  They are sometimes both in it and sometimes singley.  Hewey seems to be in it most (his/her – I have no idea – head is darker).  Not sure how long they will stay. The neighbors were given them (they thought they were going to be regular ducks and then they were mallard/rouen ducks…something like that) so they don't really want them.  They seem to eat the chicken food I put out. The neighbors also have pot belly pigs, thank God pigs don't fly, cause I don't want them over here. I am envisioning Cogburn using his spurs to cut the fencing so the pigs can crawl through…"come over here my little friends, she'll name ya and make you fresh mud!!" Ha!