When we called Eric from the airport Jeff was talking to him and I could tell by listening to the one sided conversation there was a new chicken…Jeff said "you didn't put it with the girls did you?" by then I was freaking out a bit, all I needed was sickness or meaness added to my girls. Then Jeff kinda chuckled and I could tell the "it" was a "he", and no he was not added to the girls.

So when we got home last night, this guy was roosting on the back gate. 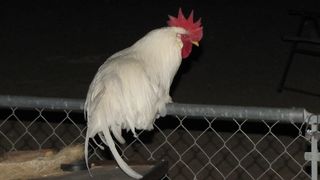 So this morning at 3am, he woke Jeff up…I don't hear with my ears out so I was fine, but I can hear him from my studio. 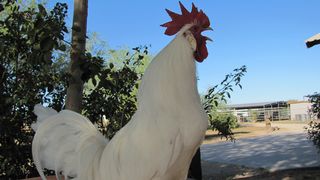 When I went out to feed the girls, I could hear him and there they were Jeff sitting in his chair and the rooster crowing away just feet from him on the side of the planter…his crowing makes my hearing aids whistle.

I said "we need to call him Sheriff, we went out of town and he showed up to keep things under control", and Jeff said "Cogburn", so that did it. His name is Cogburn…as in Rooster…ha! 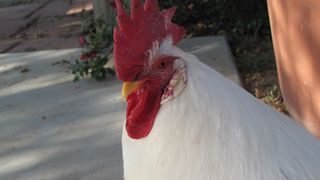 He's a handsome boy. We will keep him, until we find out where he came from or till he gets mean (I hope he does not), right now he follows you around like a dog.  He is NOT going in with the girls, and while he is here they can't run around the yard loose. 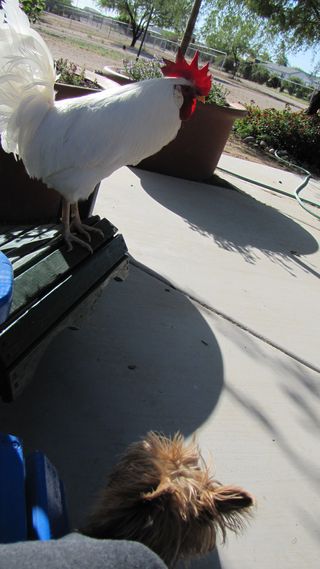 This is a cute one, Toby watching him sitting on the chair…"boy Mum he sure sounds different than the girls".

I know, I know… I am gone on an amazing cruise and the first post back is a chicken post…ha! That is cause I am a zombie with sea legs and it was easier…plus we had company today and nothing got done.