April's Mini Masterpiece – Collect Them All

Have you seen that movie? I had wanted to see it in the theater and then we never got there.  We had to go to Sam's Club and pick up a few things and they had it so we got it and watched it tonight.  Wow it was not what I thought it was going to be about and we were sobbing by the end.  What a beautiful movie.  Now if it was a perfect world they would have included Mary Poppins as part of the Blue Ray movie, cause now I want to watch it.  I kept remembering that Dick Van Dyke was the kids Dad, and was confused for a while about the Mr. Banks person…I hope I was not the only one.

Here is another cute card I did quite a while ago both sets are retiring. 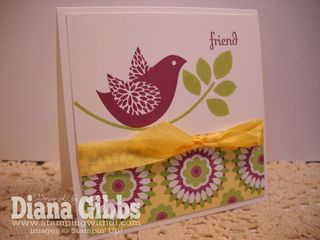