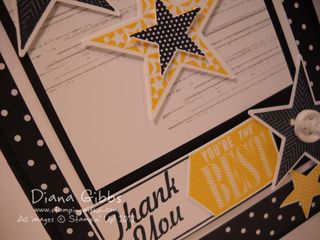 I said I would share some of the cards from my downline shoebox swap this past weekend, and today's card is brought to you by Shannon Stanley, and I love it. It uses three new sets! Eek, and two of the ones we are getting at convention so I don't have them yet. Thanks Shannon, the card is adorable…just like YOU! 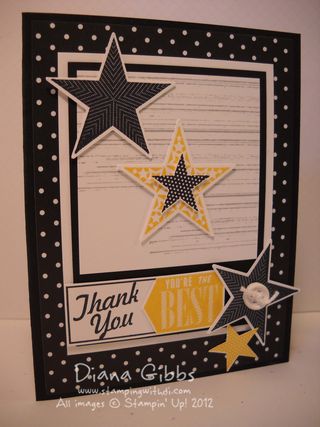 Stamp Set: Simply Star, Gorgeous Grunge, Hello Lovely (which I like to say with an accent)

Oh these are my two cents worth of Next Food Network Star so if you don't watch the show it might bore you…or maybe it will peak your interest.

Last night the chefs had to make burgers, and man I love a good burger. Some of the burgers were huge and looked so good.

Viet – did better on the stage once he told the audience he had beat Bobby Flay on Iron Chef cause they clapped and made him feel at ease.

Damaris – acted all sexy like and the judges told her not to do that, and she does it when she is nervous, she cried later when they called her on it and Lovely rolled her eyes that the girl was crying.

Lovely – she just drives me nuts, and all I noticed were her crazy glasses.

Chris – the food truck guy – he just jabbered and never finished his demo, when they were doing their burgers he was going out into the crowd riling people up and I think I remember this from the Food Truck Race.

Danushka – said take it or leave it, and I prefer to leave it.

Chad – the BBQ guy – his burger made me hungry.

Stacey – she did really good and I love her idea of putting the lettuce on the bottom so your burger does not get the bun all soggy…then she said you dont want soggy bottoms, and that was cute and not all sexy like the other girl.

Andres – he did not want to talk about his weight loss he wanted to just talk about men cooking, but really then he should never have mentioned the weight loss cause that is important. He finally at the end of his demo he mentioned it and then the audience liked him.

Nikki – did horrible this time and she is usually slicker.

Rodney – spoke like he was on speed and made a pie out of a burger…whatever.

Russell – he seemed much more relaxed then some of them and you weren't all anxious watching him.

Then people had to go and try the burgers and give a token to who they liked best.  No one was at Danushka's table (since she made burgers the size of quarters) finally 2 guys came by (of course she was a past model – although I have no idea what she modeled, but I guess if she kept her mouth shut she might be prettier – sorry I am being mean cause people can't help their voices, I can't stand mine). So she stood there with her arms crossed.

Lovely was dancing in her booth yet she complained about Dumaris acting sexy. Lovely does not see she is like the other girls and oh my gosh when the judges criticized her burgers you could tell that she was spoiled I mean she almost sulked and pouted…grow up lady, I mean Lovely, I mean Connie…whatever your name is.

So the Top 3 were Stacey, Russel and Chad. The bottom 3 were Danushka, Andres & Nikki, so I thought finally Danushka would be gone, I mean she is boring and had 2 stinking tokens, and what did the judges do? They kicked Andres off, and I was like what? He finally was getting that the weight loss was important to mention and they never gave him another week to do it…if they think anyone would ever watch a tv show with Danushka they have another thought in their heads. So next week another stomach turning episode with her, lets hope she goes next time. There ya have it, my two cents…and a half.

Well that is it for this old gal, have an awesome Tuesday and thanks for stopping in.