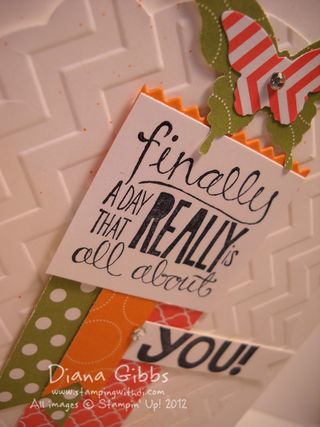 There are so many beautiful samples in this years catalog I am going to enjoy getting back to my Mimeograph Monday posting…this one is not totally copied cause I don't have the set yet…but I did have a different new set that I tweaked the card and loved it.  I actually sent it to my Top Ten Demonstrators in my downline for their sales in April. Way to go girls!! 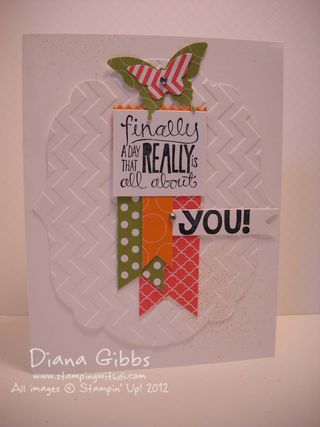 To get the "You" separate from the other part of the greeting, since it is one stamp I masked it and then did the you separately this way I could make the card a lot like the real one on page 16. What do you think, did I do ok?

Thanks to Linda for reminding me I was able to catch the first episode of The Next Food Network Star, it is always fun to watch this show, I love the judges and some of the cooks make me shake my head.  If you didn't watch it and don't want me to spoil the surprise don't read anymore.

The contestants had to make a video right off the bat, I would fail miserably as I get flustered easy. They also had to cook using potatoes and had an audience with a button that could rate them so we saw the dial go fail or pass.

Stacey: they helped her a bit and the second take she did awesome. Her food looked yummy.

Danushka: ugh, she turns my stomach, she thinks she is all that and she is not, she was a model or something but once she opens her mouth, blech.  Her food looks like it turned stomachs too, her dial thing failed quickly

Russell: big tough guy and his food was boring too.

Rodney: he says he is a pie man and I will need to google him cause he looks familiar, he was fun on camera, his food also looked delicious

Viet: Did horrible on camera but he beat Bobby Flay on Iron Chef so that would make me scared, his food was good.

Nikki: she is a complete natural on the camera, and her food looked good too even though she cut both hands cooking.

Chris: he is a Food Truck Guy, and he was not comfortable in his video, his food was bland they said.

Daniela: she sat on the counter first to do her video…ugh.  She is super hard to understand, thank goodness I use subtitles, her dial thing failed too

Chad: he tries out every year, and to me he looks greasy like he needs to wash his hair. They didn't like his food, but the audience liked him.

Andres: he lost a lot of weight so he will be inspiring. His food looked healthy, his dial was starting to go to fail but when he mentioned he used to be 330 pounds, it went to the pass side.

Connie: who calls herself Lovely, and talks about glam all the time…ugh, she also needs to get over herself. It was funny that Danushka was complaining about her and to me they are very similar. She made no sense about glam in the kitchen…what is she gonna bedazzle pork chops?  Her food looked so pretty though.  But she needs to just use her real name.

So the bottom three were Russell, Danushka and Daniela,  Russel was safe first and then ugh they kept Danushka and kicked off Daniela. Hopefully Danushka will go next week cause really I would never watch her show, she is too scary and I can not stand her voice.

So that is my two cents and a half.