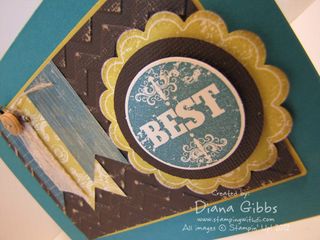 Woke up today and the internet was still down, unplugged it for the third time or so and it finally got back up.  I had a bunch of errands to do today and actually ran into MAMMa and her sweet grand daughter Hallie at the nail salon so it was nice seeing them.

I also think I picked up the perfect thing to store my Washi tape…will show another day after I decide. I have to modify it a bit. I picked it up at the antique store that I got the guest bed and I had to show the man and his son that own the store a picture of the finished bed, they were impressed.

While I was out watering the flowers tonight I saw this little guy on the tree, I would not have noticed him but he moved. 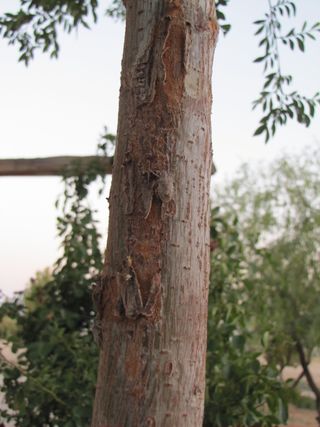 Can you see him? It is amazing how he blends in with the tree.

I wanted to show you the card I did for Rhonda's swap the other night.  I actually cased a card I got from Kimberly Van Diepen (thanks Kimberly) last year, I just changed out the DSP and the button but other than that pretty much identical. 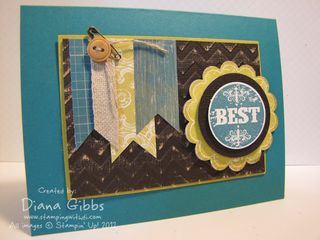 So the other day I had on the tv show Love It or List It or something like that and I am amazed at the budget people give the poor woman to redo their house. In fact the budget for the new house the realtor was looking for was not getting them the house they wanted so they increased it, but when the lady trying to fix their house kept finding major flaws in the house and had to do things different and ran out of money never did they say oh well here is an extra 20K. I feel bad for her when they end up selling the house anyway.

Well I better hit the hay since I was up till almost 2 am last night…oh wait that is this morning…then I was up early. I'm whooped.