Mini Masterpiece for April – Collect them All! 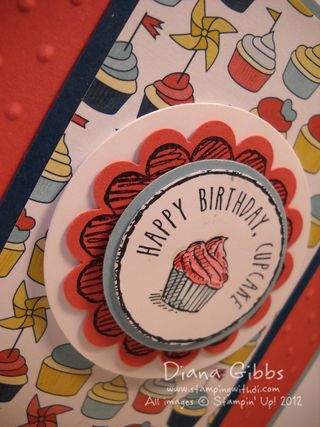 Ugh, every once in a while my left shoulder feels like my right shoulder did at the beginning of when my frozen shoulder started.  I keep trying to exercise it to keep it at bay, I sure don't want that happening again, my right one is still not back to normal. Jeff and I were comparing our aches and pains tonight, we both agreed we are getting old.

I think this is the last of my 10/10/25 Birthday card class cards to share. This one was inspired by a card I saw done by Margaret Raburn, and I changed it up a bit. Thanks Margaret! 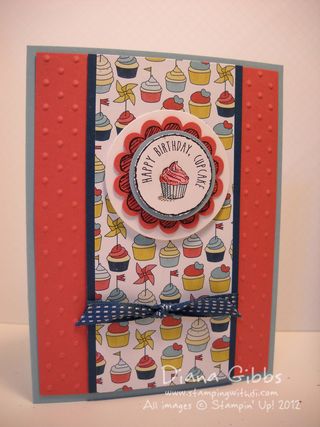 Stamp Set: Sketched Birthday (we received this set at Leadership)

So just like last night (and The Voice), I'm gonna give my two cents on Survivor, so if you don't watch the show, I'll say a much appreciative thanks for stopping in and putting up with my reality show stuff.

Survivor was crazy tonight, and I mean crazy good, so many twists and turns.

It started off with Phillip pulling most of "his alliance" aside for a meeting, leaving out Malcom, Eddie and Reynolds (the 3 amigos), they started chanting S – R – Us and doing his espionage stuff, as they walked away Cochran does the squirrely finger by his ear, and I agree.

So then next you hear Dawn screaming help me, someone help, and they all look but no one is even going to check out, what if she was being swallowed by a boa constrictor? or one of those little monkeys they keep showing wanted to check her for lice? the only one that goes to see is Brenda. Seems Dawn was smacked in the mouth and loosened up her bottom teeth and she bent in the water and lost them. She was crying and freaking out and she could not go in the water to get them, so Brenda put on a snorkle and dove down and got them, and Dawn popped them right back in her mouth…without even cleaning them!!! Speaking of teeth most of these people have nicer and whiter teeth than me…so somehow I don't think they are only brushing their teeth with sticks.

Then they did a group event challenge for a nice dinner and stuff and it was a challenge that has been done before, in fact it was done in the season that just ended that Malcolm played in so he kinda had an idea up his sleeve to find all the bags in the mud to help his team mates, but not sure it worked, he was taking too long and should have just moved on. It made them way late, plus when Sherry ran she took for..ever, her boobs even came out of her top cause they had to blurr it. So their team lost. The other team went and ate all this food and I was thinking shouldn't you clean up before you eat, since they were covered in mud, as Cochran licked meat off his palm. After they ate Dawn got showered before she went in the pool as they all did, except for Phillip who went in covered in mud and rice and whatever, you could see this big muddy mess all around him in this beautiful pool. He didn't impress anyone, and he may have been naked.

So Dawn is kinda losing it a bit, but she has not slept well and that can make you freaky, so Phillip says she is a lunatic…now takes one to know one I think. After a good nights sleep finally, Dawn seemed much more stable.

So all the survivors except the three amigos have figured out how they are going to vote, they are voting for Reynold and Malcolm by splitting the vote, so it comes to individual immunity and I am thinking Reynold will probably win (it is a reality show and who knows how real it is, I mean we need drama right?) So it was a swimming thing, and Phillip now all of a sudden does not want to do it…even though they have done water things before where he had to go underneath, so he bows out, he was tramatized as a child and almost drowned and he might have been but it seems weird he never said anything till now, maybe he just figured he was good and safe, I don't know…I mean they all got guts for even going on the show, the first day I'd be like "is that a lice picking monkey?, I'm outta here!".  Of course Reynold won just like I thought. So then the others were like ok we will vote Malcolm….well what do you know right in front of Andrea and Dawn, Malcolm finds an ammunity idol, meanwhile he already has one! I would like to know how big this island is that they find these idols so easy, I mean half the time I can't find my snail adhesive on my desk. So then everyone is freaking out who do they vote off now? So of course Eddie is freaking, cause he is the only 3 amigo with no protection, so I am thinking Malcolm has to be a true friend and give him one of his.

So the tribal councel had to be the best one in a long time, especially when Malcolm shows he has the idol to Jeff but then he says he has another one and gives it to Eddie, well the looks on everyone's faces were like oh my gosh who are we going to vote for? They start whispering Andrea's name. But then Erik (who his hair is getting so thick and wild) says that just cause they have the idol does not mean they are safe unless they play it. So Phillip says they need to do what they planned to do. Then Malcolm says that the 3 amigos are voting for Phillip cause he is driving them nuts. So then the voting started. So before Jeff reads them he asks if anyone is going to play their ammunity and Eddie stands up and turns his in and then so does Malcolm, and sure enough their names come up on the cards, along with Phillip…so then Phillip got voted out…and too funny, Eric spelled Phillip…Fillup…cause I think they were full up to there with the whole covert mission stuff. It was just a wild night, and seemed to fly by. I am really kinda hoping that Cochran wins the whole thing, but I don't want to jinx it, so I will knock on wood.

So one of the commercials was for Under the Dome, which I can't wait to start, it is by one of my favorite authors Stephen King, who is on my bucket list for meeting some day. And yay, the original Victoria from Twilight, Rachelle Lefevre is in it. They just keep saying June, will have to google dates.

OK, that is all the blabbering I am putting you through for tonight.