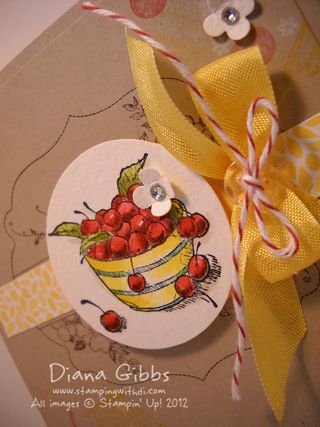 Wow today was crazy, the retiring lists are out, pre-ordering new stuff, ordering new catalogs…plus I had to get a crown this afternoon…so tonight I'm a little sore, hoping to wake up in the morning and the dull ache will be gone. I did take a Tylenol earlier, and then I have Doc Oz on and he is talking about acetaminophen, so then I was freaking out. I swear that show one day they will say drink whole milk, the next day he is saying don't drink milk. Can't win for losing.

At Spring Fling the very talented Mehgan DePhillips swapped this adorable card and I asked her if I could case it and she said yes, and in fact she had cased it too, from Steffi Nitzpon. So I want to thank Mehgan and Steffi, I love this card and all the little details that make it so special.

This stamp set, Cherish Friendship is actually retiring! Eek! Say it ain't so! Yep, it's so! 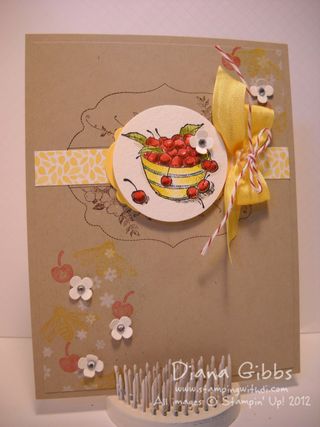 So did you watch Survivor, not as exciting as last week…look away if you don't want any spoilers, I know I was on Facebook earlier, and someone had Survivor in their post and I quickly looked away.

I can't remember how many days in this is, maybe 28 but people are tired, and hungry. Brenda was crying and Dawn was helping her telling her to drink water, and ugh the water looked all yellow and dirty, I sure hope they all got shots and stuff before this show.  There was also tree mail with money which meant they are going to be doing the food auction.

It was nuts, and so  mean, but it is the luck of the draw…or however much you want to pay. Reynold had to choose from three baskets, and picked his original one and got one slice of pizza, the second basket he could have picked had the rest of the pizza and Sherri quickly said $500.00 and won it. Dawn also paid $500.00 for a roasted chicken. Malcolm spent the rest of his money on a game tip and it told him where the immunity idol was. Heck I don't think I would have remembered the clue, and he had like 60 seconds to read it. Andrea got spaghetti and wine, but she had the choice to give it up for rice and beans for the team, and she did. Cochran got an advantage in the game for immunity. Poor sweet Brenda paid $300.00 and got pig brain. Jeff pulls out letters for home and they were $20.00 each, OMG the poor people that had no money left. My  heart was breaking for them. Then Jeff pulls out this huge bowl of peanut butter that they all had so long to eat and whatever was left in the bowl stayed, so everyone was putting it in their hands on their faces etc to take it back to camp, where they basically scraped it off their body into a bowl to share later…OMG! where is my yellow dirty water when I need it.

In the middle of the night, where I would be cringing and calling for my Mummy, Malcolm is digging under a tree for the idol…I mean hello, does he not see the snakes and stuff they keep showing slithering around? Well once it gets morning Andrea gets over there and won't leave him alone to find the idol.

Then it was game time, and they had to hold heavy stuff for the longest, Cochran used his advantage, and I thought he used it too soon, but it worked and he won, and then he was kinda bragging a bit, but he has been lucky on his winnings I think.

So then it gets to the tribal and Malcolm has been pretending he found the idol but when they said to play an idol and he didn't everyone was smiling….except Malcolm.  So of course there was a three way tie, Reynold, Malcolm and Andrea………..who gave up her spaghetti for rice and beans, gee thanks!

So then everyone knows Malcolm does not have the idol and when they revoted, Malcolm got kicked off, I was sad a little cause he tried hard and didn't win last season. I still think it would be cool for Cochran to win cause it would be the smarts over the strength, and I kinda like Eric too. That hair is crazy.

I wonder if Andrea or Cochran who also knows where Malcolm was digging will find the idol next week?

So there ya go my two cents. I'm gonna go wash the peanut butter out of my hair and go to bed…ha!