Today started out like any regular day…well except for this… 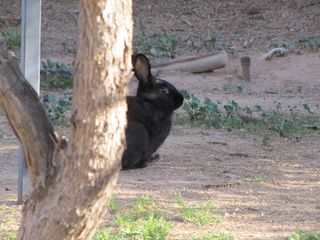 … there was a black bunny in the back yard. 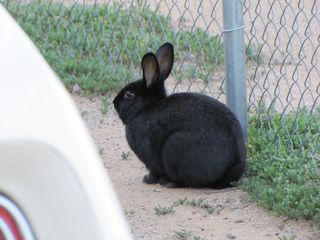 This looks like an Easter bunny kinda bunny, not the wild bunnies we have running around. Although he was with a wild bunny. I threw out some carrots but they didn't get them.

So then I headed off for my massage, I have been trying to keep my frozen shoulder from coming back, doing exercises and getting it worked on now and then and after Spring Fling I needed it.

So when I got out of the  massage place the clock said 11:11, and I said "Hey Poppa & Granny". I ran over to the antique store near there but didn't find anything. So then I headed home. When I was on Ironwood I was going behind a slowpoke and finally was able to get around him. Then I was almost home, I could see my turn off and there was a car in front of me. Then all of a sudden the white truck that was headed our way crossed over the lane and into the side of the road, I thought he was making a u-turn or something, but then he came so fast out of the ditch and he flipped his truck 4- 5 times. It ended up on the hood in the other ditch and then it flipped onto its wheels, it was smushed pretty bad. The car in front of me stopped and I stopped too and we kinda blocked the road so no one could drive through. I called 911 and I am so bad with directions, I even could not remember the street name Jackpot, one of the cars in line yelled it out to me…what a dork I am.  So anyway as I was on with the 911 and then the paramedics, the driver starts crawling out of the truck and the older couple had gone over to the other side of the pick up. There was stuff all over the road and in the ditch. The paramedic asked me to ask the driver if there was anyone else and he just pointed to the truck and then I looked and the older couple were standing by the passenger and he had been thrown out and he was in bad shape.  The paramedics, police and there was even two helicopters came and took them away.  I had to give my phone number and address and the police would come by later, they did and I had to give a statement. I was shaky and almost wanted to get sick to my stomach for quite a while, you would think I was in the accident. I have a splitting head ache, so I am going to bed early.

I had never seen anything like that in my life. It was like un real, like I was watching a movie or something. I sure hope they are ok. I know the road was closed for a long time cause the police had to take aerial pictures or something.

So I am thinking Poppa and Granny made that driver be slow on Ironwood so I was not closer to the truck, cause basically it was just seconds. In fact the cop said the car in front of me just barely got missed. Geesh.

Be safe everyone, and take it easy out there on the road.

Have a great weekend, and thanks for stopping in.