The Spring Catalog is Here! 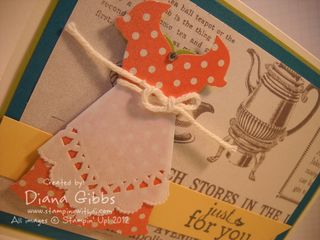 I got the cutest card at Leadership and I think it was from my BFF in training Sally Nusbaum, she always says that if my BFF Tracy quits, she will take over. She is too cute.  The card was probably in a clear envelope but is not anymore since we used it to base one of our make n takes for Spring Fling, so I hope I am right. Thanks Sally! We used different DSP and the heart shaped doily from the artisan kit for the apron and the string came out of the pop up posies. Doesn't it remind you of I Love Lucy? 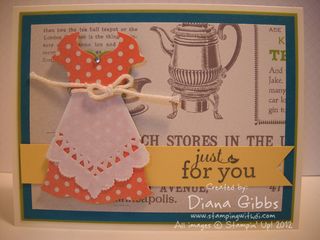 So you know I am boycotting American Idol right? So instead I am watching Survivor Fans vs Favorites. I don't think I have talked about any of the episodes so this is my two cents so far of the season…don't read if you have not watched tonight…

On some of the challenges they just don't get it. At one point they were doing these rings and all the girls were on the platform and one poor girl kept having to go into the water, while the other team had a bunch in the water.

Shamar from the get-go seems really lazy. He is an ex Marine, and I just don't think that he could have been like that as a soldier. At one time he was saying he could not do a swimming thing because he had contacts, yet tonight he got sand in his eyes and scratched his eye and they took him out of the game. So wondering if the contact lens was an excuse??  I am sad he got hurt, but I think he wanted to go home anyway. In fact last show he was going to quit and his team talked him out of it, so then tonight he was saying since he stayed they would just have to bring him rice, cause basically all he does is sleep in the hut, Reynold (who seems sleazy) said 19 hours a day.

Tonight they had a little native man helping them and I think he was naked except for the red drape thing he was wearing. Might have been a little interesting when the girls were dancing with him. Sorry little man, I left my dance card at home.

Phillip is kinda an odd duck, naming people like they are all on the A-team or something, and then he also has that little crazy Brandon on his team and he is scary, and looks like next week he goes on a rant.

I think that the girls should have beefed up a bit before the show cause they were skin and bones when they got there, and boy I thought I had bad posture.

Cochrane reminds me of Revenge of the Nerds, and he burned like immediately.  It is fun seeing Malcolm immediately coming off of last season. Sherri reminds me of Cynthia Rhodes from Dirty Dancing. I like Erik and Matt. They both have wild hair.

So tonight at one of the challenges, Phillip would stand like at a pitcher stance before he would throw, wasting time I think…I know it is all for tv but still. Makes me wonder how syncronized it really is, when they are so close to the other team when they win.

So that was probably more than 2 cents.