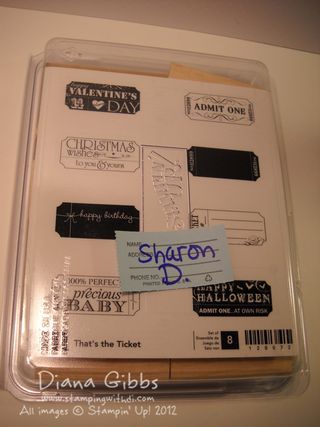 Congratulations to Sharon D., she won the stamp set "That's the Ticket" for the online orders for the month of December. Thanks to everyone for placing an order in December, I really appreciate it. I will be having a new set for January and will do that in a separate post.

Oh remember last year when our heater burned up all the wires and I called 911 and the firemen came cause of the smoke? Well a couple weeks ago I smelled it again, and we had it checked and it burned something else, so we had that fixed. Well this morning, at 4am…it happened again. The horrible smell, at least there was no smoke and whatever happend tripped the breaker…thank God.  So again out come the a/c-heater guy and everything is fried again inside…so yep. We are getting a brand new unit, not how I want to spend my money at the beginning of the year, but I don't want our house to burn down either.  Thank goodness we don't live in Canada (well cause of the cold) because we don't have any heat in the house. Nights and mornings are a little cold but during the day it is ok.

Oh and I think I have found the boys a new home.  In fact Butterball was fighting with Chiquita today when I got home and got him all bloody, and I am like what the heck? Then I had to leave for my hair appointment, and Jeff said that eventually Chiquita, Edgar Allen Poe and Mr. T. all had Butterball cornered and under a bush, I think they have had it with his meanness, I am excited to have them somewhere else where they can get the loving…from the girls, they need.

Previous Post: « Free Stamp Set (and Punch) of the Month – Pretty Petites
Next Post: A Look Back on January 2012 »