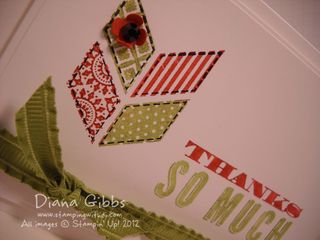 One of the perks of being a Demonstrator is being able to pre-order from new catalogs a month early so we can work on card ideas for classes/workshops/swaps and well to get our drooling under control before we have to show off the new stuff in public. I have my stamp club this weekend and I want them to be able to play with some new stuff from the Spring Catalog and Sale-a-Bration, so I thought this card was cute…oh and if you are interested in joining a stamp club, I have one starting in January. 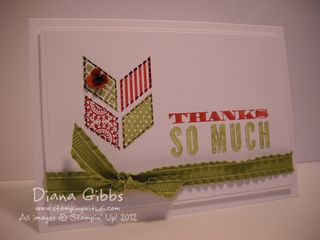 This is a quick post, cause I got up really early this morning. Remember quite a while back the wires burned up in our a/c heat unit and it was smoking and I called 911 and the fireman came? Well this morning after Jeff went to work, I smelled it again and I woke up and quickly turned off the thermostat. There was no smoke but the smell was definitely back. I called Jeff and he called our a/c heat guy and he came out late this afternoon, and the carburator/generator or something got too hot and burned and it actually arked something and a major electrical wire did something and it tripped the breaker. So he replaced stuff, but man that thing is driving me nuts, this going bad and that going bad, so I am hoping it gets us through the winter and then we need to look into getting a new unit.

So I am going to sign off and actually head to bed.