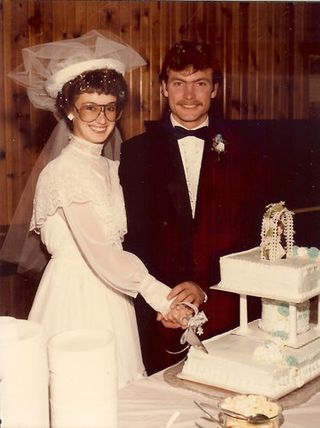 28 years ago Jeff and I got married and time has just flown by.  I know I have told the story before of how we met but just in case you are a new reader, here is a quick story, plus I love telling it.

Jeff was on his way to Alaska and had all his money stolen so he got a job as a carnie at the Edmonton Klondike Days, and I just happened to be working there in the Ontario Pork food booth. He had been in the Army in Germany and when he came up to my booth he ordered the Scnitzel. He worked at the haunted house so he had bloody makeup all over his face, but when we met we knew it was meant to be.

Jeff never did make it to Alaska until Stampin' Up! had their incentive trip there and I worked really hard that year to earn it and we did, it was the first trip we earned and it was the year of our 20th Anniversary.
4 years after we were married we had Eric, and he was a definite handful with his learning disabilities but we all survived it and we have raised a sweet young man.
We have been blessed to have found each other and I thank God every day that He made him for me, he has the patience of a saint and puts up with me and my crazy ideas, like when I quit my job to do Stampin' Up! full time (look how great that turned out though eh?), when I thought we needed chickens, and maybe more chickens, and maybe a bigger coop…he just takes it all in stride.

He has his handsful with Eric and I cause we are so much alike. I always say he is earning his wings.

Anyway that is a quick little story, and I hope I am still keeping him on his toes for another 28 years.
I love you honey.
Have an awesome Friday and thanks for stopping in.
Hugs,
Di
Previous Post: « Carry On Stamp Set Winner
Next Post: October Online Thank You Cards »