Wow yesterday was fun with the 15% off sale wasn't it? I hope you got some of the things off your wish list and maybe a stocking stuffer or two.

The other day when I was out with the chickens Butterball, who is a rooster hopped on Stella and bit her comb. Now he is way smaller and was no where near that area, if you catch my drift, and I don't want my girls having to put up with that, so tonight we nabbed him and put him outside the coop, but then he paced and paced trying to get back in, and the rest of his brothers and sisters kept watching him. He even was making rooster noises, not quite crowing but definitely different than the girls, so then when it got dusk, I worried and opened the gate and let him back in, I'll have to pay attention and see if he keeps doing it, I only saw it once.  Once he gets bigger I will let him and Chaquita, can you believe it she is a rooster too? I keep saying she cause that is what I hoped Chaquita would be. In fact Mork turned out to be a hen, so I need to spell it Morque. One of the little black ones is a hen too, and she is Mindy. In fact I really think 4 of the 6 are roosters. I will let a couple roosters run around the yard and see if they behave if not, well…let's just hope they do.

I thought I'd share a Stampin' Up! card. I love this set. 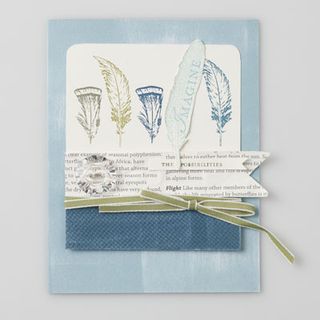 I'm almost done my book Gone Girl, so I wanna go to bed early and read. Plus what's up with all the TV Shows playing repeats that I swear were just on two weeks ago? Well I was going to go to bed, but I just realized that for some reason last week the DVR taped Law & Order or something instead of Chicago Fire, so I am watching it online…thank goodness for that.

Have a great Tuesday and thanks for stopping in.