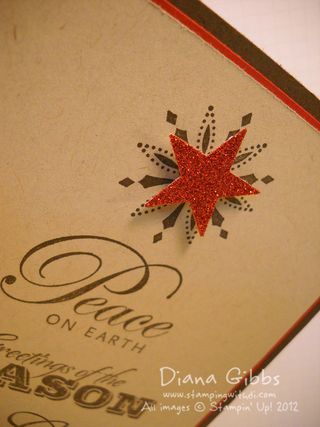 So while I type my blog the DVR is taping two shows Nashville and Chicago Fire and then I can watch them later, oh and it is set to tape American Horror Story too. Jeff was watching tv and luckily I was in there cause it was going to change the station and I had something set to tape, so I watched Survivor for real, if you didn't watch it don't read anymore…

I am sad that Dana got sick and left, she was a little thing but tough. I figured they would have the small team merge with the other team, but when the team won I was wishing the guy had of looked back and smiled at his past team mate or something. So when Dana left the one girl is crying and what? she had black mascara underneath her eyes…so as well as fancy clothes and stuff they bring makeup? Boy it sure is different then when it first started eh?

I think that the Dawsom chick has a thing for Jeff Probst she kept mentioning him, so when she got kicked off, which I am sure Jeff Kent  is glad since she knew he is a famous ballplayer, she was staring at Jeff Probst like all weird and then hugged all over him, I was waiting for her to wrap her leg around him, then I thought she was going to turn around and say something about the ball player but she didn't. Oh and the end when she was telling to the camera what she wants Jeff Kent to buy for her…holy moly what a cuckoo.

So this is one of the fun cards we did at the shoebox swap and this is Elizabeth Martinez's card, I love how she used the greetings to make the shape of the tree, and the star punch with the Snow Swirled stamp looks cool. 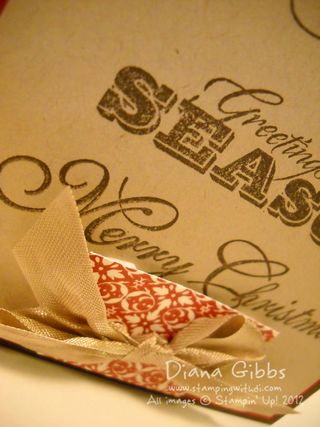 A piece of DSP made into a pot on the bottom, tied with some ribbon and voila' cute card. Thanks Elizabeth. 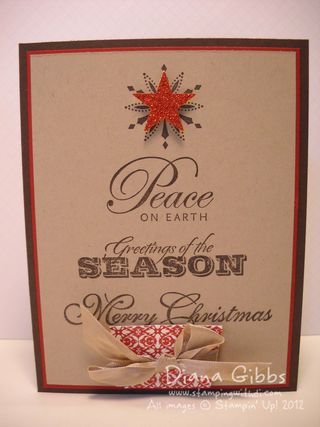 So typepad is being all wacky, I just put the recipe in and now it is gone. Maybe I need to type my posts in word and copy and paste….Let me try again.

OK, I gotta be quick and sign off before it messes up again.

Have a great Thursday and thanks for stopping in.