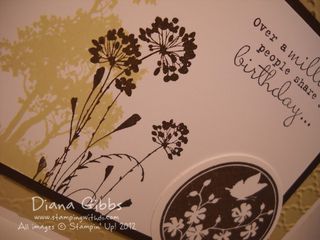 Since I am not going to watch American Idol I have picked a different reality show and am watching Survivor, we used to watch it when it first started but I haven't seen it in years and boy has it changed, well some parts of it. There is this one girl on there that she must have a whole trunk of clothes, it's like a fashion show, she has at least 3 bikinis, one is like a leapord one with a wrap thing, sometimes it looks like she is wearing a bra. Tonight I swear she was talking to the camera in a pant suit with a jacket and knee high boots. What the heck?

So you have her and then you have another lady, who is strong as an ox who seems to wear the same bathing suit all the time and she was combing her hair with a stick. Someone didn't get the memo on what to pack.

I'm glad they kicked off who they did tonight cause he was all talk and when it came to the challenges he was a wimp. He'd be all tired and couldn't go on so the strong as an ox woman would have to do it, but then when they would lose he would have enough strength to break stuff and throw a tantrum.

So did you watch Nashville? It was pretty good. I also can't wait to check out Reba's new show, I think they cancelled her Reba series too soon. I bet if another network had of taken it over it would have ran longer.

So I wanted to show you the card my downline got for having the top ten sales in September and it was also my thank you card for online orders in September.  I got a swap card from Jo Golden at Founder's Circle and I tweaked it a bit by adding an embossing folder and a greeting. I love it and hope everyone else does. Thanks Jo for the inspiration! 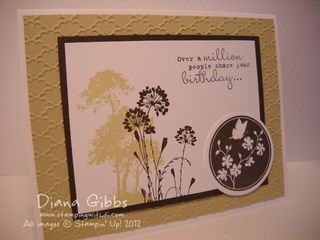 Stamp Set: One in a Million,

Well I better hit the hay, I was headed to bed and was bad and turned it to Food Network and Restaurant Stakeout is on and dang it is one I have not seen, it sucked me in. That restaurant owner was horrible, she had on short shorts and a spaghetti strap top, that is not very boss looking, no wonder her restaurant was failing. Maybe she'll be on Survivor next season, she has the wardrobe.