So I am going to turn this post over to you? Huh? What?

I am so amazed with the people that I have met through my little blog, and it is amazing how small a world it is, how similar people are, how we affect people etc.

A blog reader commented on my Walgreens post that that is their neighbours dog, Boston - what fun!

A blog reader's son is good buddies with Zac Brown - gotta love that, they are one of my favorite bands!

Tell me something interesting, fun, weird...whatever about you in the comments section. I tell you stuff about me all the time, even stuff you couldn't care less about, or wish I hadn't of shared, or can't believe I shared...so step up to the plate and share...if you want...it is just for fun...no worries if you just want to lurk and read that is cool too.

So ya wanna be the first one?

Have an awesome Tuesday and thanks for stopping in and playing along.

It's a Clean Sweep 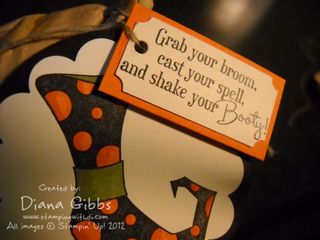 I got half my studio cleaned up today will finish the rest tomorrow, don't know why I can't keep it tidy.

While I was at Founder's Circle I swapped with Janet Baker this adorable 3D broom and I just had to do it for my club girls this weekend.  I have a lot of club girls that live out of state and I wanted them to see how easy the broom is to make since theirs is already made for them in their order and I thought what easier way to show it than a video...plus this way you can learn too.

Thanks Janet for swapping with me. 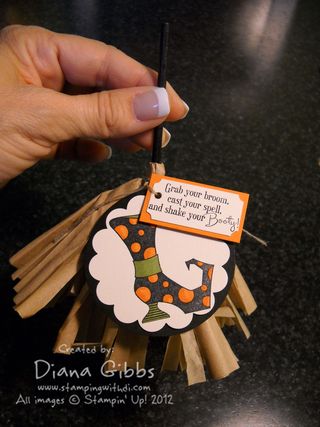 Here's to show you how easy it is to do. If you can't see the full size of the video you might have to watch it on Youtube, I can't figure out how to make it fit. 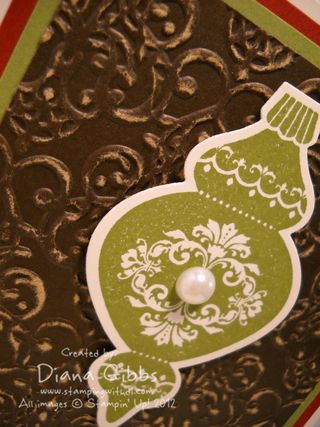 I don't think I showed this card yet.  It was based on a swap I got from my fellow Twilight fan Glenda Travelstead, thanks Glenda!

This was one of the cards from my 10/10/25 Christmas card class, it uses the very cool Core'dinations cardstock.  You can use it as is, or you can sand it with the new sanding block, or even better run it through the big shot in one of your embossing folders and then sand it...gorgeous! 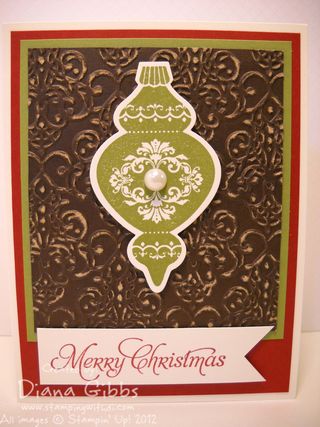 Well this old gal is off to bed, I can't tell if it is allergies or a cold but I am gonna take a cold pill anyway, which reminds me I saw a funny (since it was NOT happening to ME) Walgreens commercial the other day, Grandma was baking and the grand daughter was helping, and when the Grandma was not looking the little girl sticks her finger in the batter and licks it off, then she takes the spoon and lets the dog lick it and puts it back in the bowl, then Grandma turns around picks up the spoon and then SHE licks it...I was getting my nails done when I saw it, thankfully I was not eating. I could not find it on Youtube to show you, but just watch for it.

I've had several emails asking for an update on the chicks and you won't believe the changes in them. 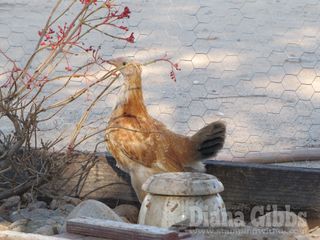 This is Mork, she is a hen. Perhaps I need to change her name? One of the little black silkies, I still have not named them cause I can't tell if they are boys or girls yet and their coloring is not really changing. One has quite the mowhawk though. They look like ravens. They have pretty much eaten everything off the Firecracker Bushes, they seem to be leaving the Texas Sage plant alone, so will see if as they age they will let the plant grow back, if not I will take the Firecracker ones out and plant somewhere else and put a couple more sage ones in there. 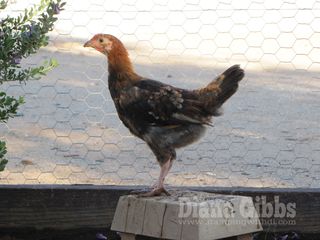 Can you believe that this is Butterball? He is a rooster (pretty sure). I am hoping a nice rooster cause I am still undecided what to do with the roosters. 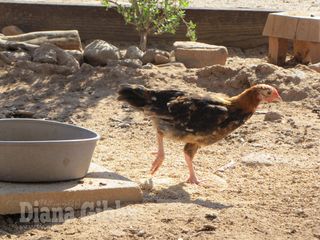 You can see his comb and his wattle a little better here. 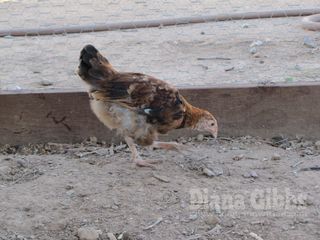 This is Chiquita, still hoping for a hen, but just not sure.  If she/he is a rooster her/his comb is not growing as fast as Butterballs, and she/he is bigger. 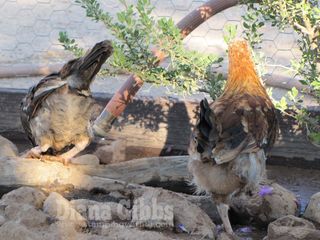 Chiquita and Butterball playing in the mud, nice butt shot! 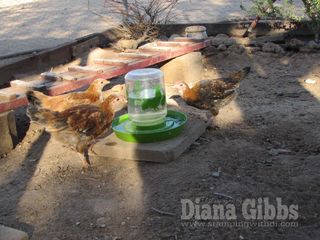 Hard to believe these are my three little yellow chicks eh? 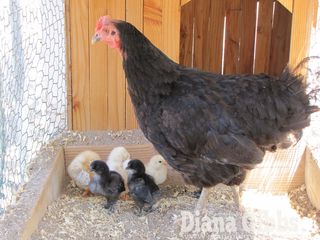 Remember them at this size? 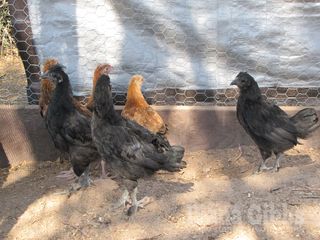 They pretty much stay together.  They sleep together and everything. Now even Alice chases them away from food and stuff so they are left to fend for themselves, the life of a chicken I guess. I sure hope they get tamer cause they are really scared of me. I know Fiji at this age would follow me all over and she still does, that is the difference between a hen raised chick and an incubated one or one you bring home from the feed store. 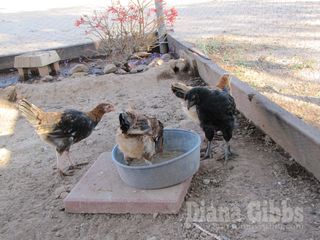 I got a feed recipe from my favorite blog Fresh Eggs Daily and they love it. The babies have to wait for the big girls to eat first.

We are having a major ant problem, today an egg got broken in the nesting box and when I went out to collect them there had to be a million ants in there.  I cleaned all the boxes out and put in new shavings and dusted them with Diatemacious Earth, but I wish there was something that definitely would kill them but that would not hurt the chickens.  I swear by Amdro in other areas of the yard but you don't want even one granual near the chickens.

Well I better get off here, I have stamp club tomorrow and my studio is a mess. 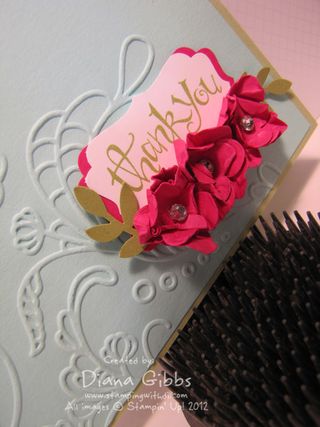 I just realized I had not shown you my finished swap for Founder's Circle. I only showed you the pieces as I worked on them. This was a case and slight change of a card I got from my friend and downline Jill Parker. Thanks Jill. 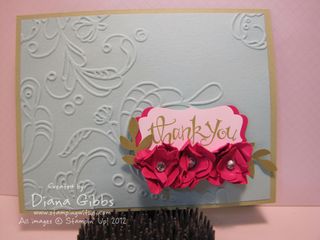 So since I don't think I will be watching American Idol this year. Even adding Keith Urban won't make me be able to stand Miki Minage or Mariah Carey, I thought I would watch Survivor, I have not watched it for years, but I remembered Mike from season two when he got burned and had to be taken away, and I also watched the Facts of Life and it will be interesting to see how she does.  I forgot all the craziness of it.

Here's my thoughts on the first episode:

So Russell who is a person they brought back said he did not want to be a leader, and then he proceeds to boss everyone around and kept getting naked-er and naked-er.  I am thinking they should wear a bathing suit under their clothes and not underwear.  Heck one girl was wearing flip-flops and a dress, really?  The yellow team has these two ditzy girls, and they flirt and try to get their own way, that will get old fast. Repeat Mike kept hurting himself, his head, his hand, his finger, his foot.  Zane is hilarious, and hard to decide who he really is, but guess it doesn't matter since they kicked him off. I wonder what happened to those poor chickens that they threw off the boat, I don't think chickens can swim.

Oh and the snake shots are those around where the people are or just taped and stuck in there, cause they can cut those right now.

So my stupid frozen shoulder is coming back, I can't believe it, it was doing so good, and the pain is starting all over, so I am back to my exercises and hoping I can nip it in the bud and that it goes away.

Well I better get to bed, I have an early morning.