Well we did it. First thing this morning we moved Alice and the babies into the big coop.  We just lifted the pen they were in up in the air and they walked out.  With a little bit of coaxing to make Alice go into the big coop the babies followed her right in.

Then we had to put up with Clara being all mean, I think we maybe should have put them in there sooner cause I think Alice was a little more protective of them a while ago, but she still is being a good Mum, but when Clara picks on them she does not rear all up and get fat like before. A couple times Clara got Alice flat on the ground and was on top of her pecking her and I scooped her up and banned her from the coop for a few hours.  Jeff kept saying "chicken enchiladas!" After a while she wanted back in and so far so good. If tomorrow she is bad, I will put her in Fiji's old mini coop-er for a few days and teach her some manners. Pecking order or not, I am the boss! 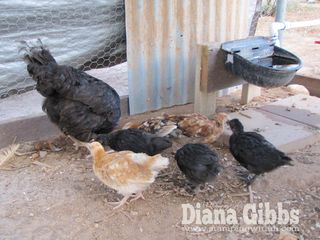 Alice showing them around. "This is where we get water".  Although we have their water and feed in other containers, I have a few spots so no one has to fight. 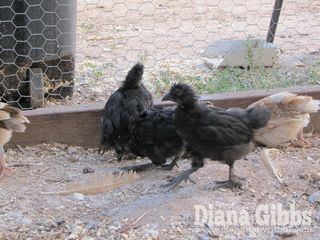 Jeff's brotherTim and his daughter Charlie stopped over today and he said the black ones are ugly. I must admit they have a totally different look then the wheatens (I think that is what the yellow ones are), I love the mohawks. 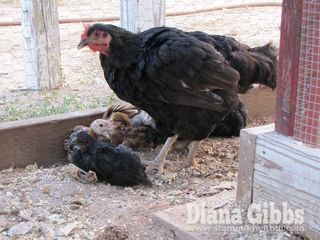 Staying close to Mum so they don't get in the way of Clara. 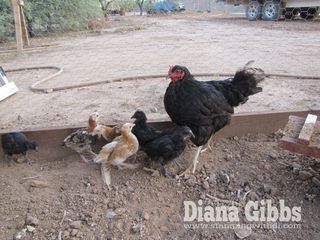 "Gee Mum is this where we have to live now?" 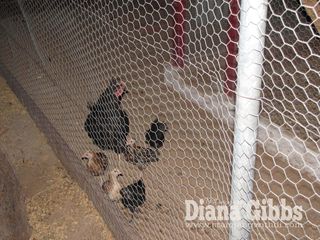 This about broke my heart, they are standing along the coop looking out at where they used to sleep. Alice finally went into the sleeping place and they are on the ground under her. Still too young to be sleeping alone and roosting.

Hopefully you enjoyed the post even with the "singing" going on…ha! Granny always said "if you are singing for me, you can shut up anytime".