FREE Howl-o-ween Project Kit when you join in August

FREE Stamp Set of the Month – No Peeking 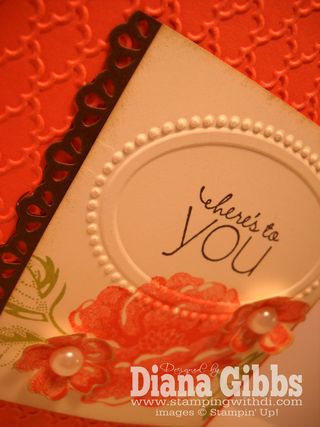 Just a quick post today. I got the prettiest card from the uber talented Mary Ellen Byler at convention, I am pretty sure it was from the GoDiva swap, thank Mary Ellen.  I tweaked it just a bit and whipped one up.

Of course my photo coloring looks off, and that irks me. Reds do it and I guess Calypso Coral does it too. Hmmm….I take the pics at night, maybe I need to take them during the day with the door open? 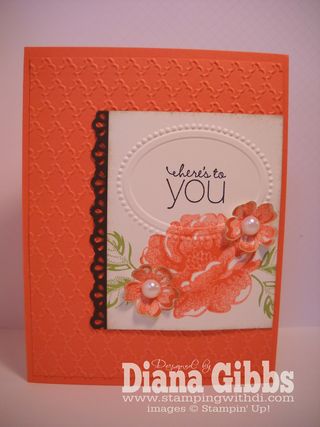 So I watched True Blood again tonight, I had missed the first part of it on Sunday, and I can't believe there are only 3 more episodes. They sure are going to have to jam a lot in.  It was so sad with Hoyt, Jason and Jessica, I was even crying.  And then that one part with Bill watching on the TV screen with Eric and his sister and then Godric showed up. Didn't it remind you of a StarTrek episode? I mean Bill even looked like he had a beam me up scotty thing on his blue shirt, then they beamed Godric in there, it was just odd. Do you watch it? This season has been up and down in my enjoyment, not sure how much longer they can keep it on TV ya know?  It has gone so far away from the book now that it is hard to remember which is what when I read.

OK enough blabbering, I said it was a quick post.