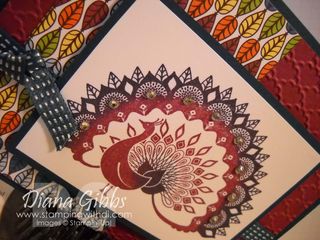 I am lucky enough to be part of my sweet friend Robin Merriman's GoDiva swap group and Robin hosted a swap a bit ago with new sets.  I thought I would share some of my favorite ones once in a while.

Today I was also lucky enough to get into the orthopedic surgeon, when I called the secretary had said the 20th, and I am like I won't be here, and she said could you get here today? And I am like you are darned tootin'.  They had me see a non surgeon Doc I think they said, cause they are hoping physical therapy will be all I need. Me too.

I took my xrays in and he said my shoulder bones look fine, he said that they can't see tendons and stuff on the xray though.  He did a few things with my arm, and said it looks like frozen shoulder also called Adhesive Capsulitis he said he was going to give me some cortisone shots to ease the pain and so that I could start on some exercises at home.  He said to come back after convention, and see how I am doing, if I need another shot and if I need physical therapy.

The shot hurt a bit and did burn but nothing compared to what it has felt like. In fact last night I could hardly sleep. So after he gave the shot it already felt better. He said it will take a few days to really get better.  When I got home I took a nap cause I was so tired.  I got up and was a bit sore again, but still not as bad.  I did my exercises and want to figure out my convention swap tomorrow so am hoping that it is even better then.  So I am glad I have this beautiful card to share with you.  It was made by Kay Kalthoff.  Thanks Kay, I love it and the colors are so striking and I love the details with the rhinestones. 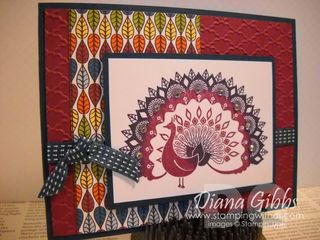