Ok, this is the two legged kind instead of the…well two legged, with wing kind.

For my downline going to convention I wanted to give them something fun, every year I try to do something different. 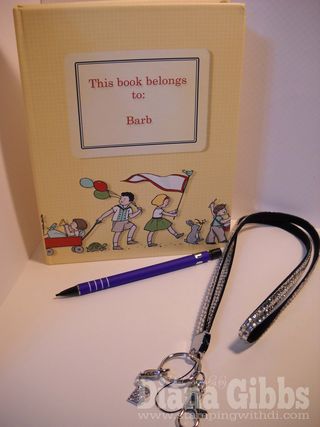 I did a personalized MDS journal for each of them, I gave them a pencil and a Dr. Suess eraser (not in picture, I found them later and couldn't resist), a bling lanyard with their bling initial on it. The logo for convention was like a black board so I wanted it to look like an old school book. I think they liked them.

Here's a few people pictures, I was bad and didn't take tons, so hopefully people that did will email them to me. 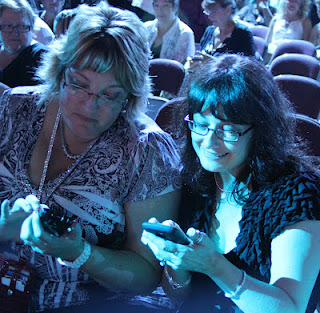 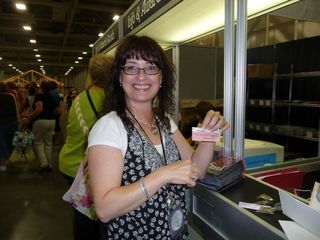 MAMMa took this one, up at the awards booth finding out that I was going to Founder's Circle again. Thanks to my awesome downline and amazing customers that help make it happen. 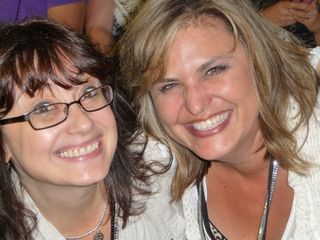 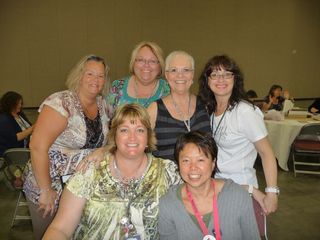 Melissa, Jacque, MAMMa, me (in back), Rhonda and Liz (in front).  This was probably during make n takes. It should be renamed gab n takes. 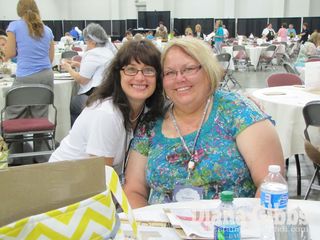 My sweet friend and downline Jacque and I at lunch, she's rockin' her bling. 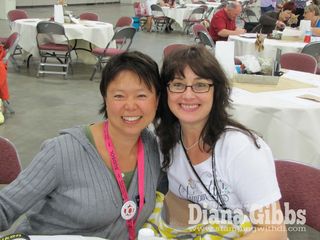 Liz and I, she is such a cutie. 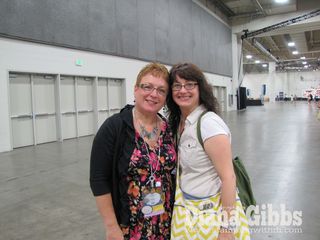 My sweet friend Patsy, who I met and kinda adopted on our first Alaska cruise.  I recognized her last name from a fellow local demonstrator who had the same one, and we hooked up to sit together for make n takes and we have been friends ever since. 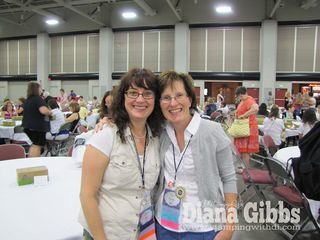 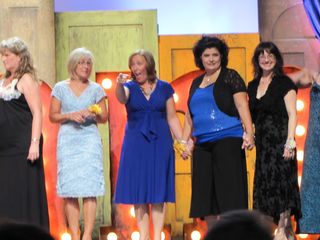 On stage for Fiji. There is Georgia, Robin, Tiffany and me…can't wait. 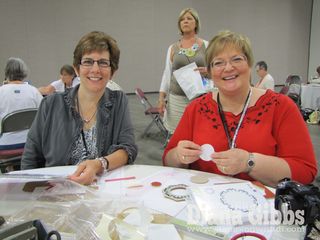 A couple of my two darlin' downline. Kristen from MI, and Barb from IL. They got to know each other before last years convention through emails so when they roomed together it would not be awkward and these two hit it off. This is their second and hopefully not the last convention.

So I am probably nuts for showing you this…but I wanna give MAMMa another laugh, plus it's not like you can see my bum or anything. After the awards night, we went back to our room and we were going to go down for a cold drink so I wanted to change, Rhonda was in the bathroom so I figured I would change in the room, heck MAMMa has the same things as me and I was not going to be naked.  So anyway, I have put on some weight so I wore a spanx underneath my dress that night, as I was pulling off my dress, I forgot that the dress had a slip lining that was attached at the straps (I think it was sticking to the spanx), so as I took off the dress part I forgot about the slip lining and I was stuck, well MAMMa was laughing so hard, she had to get her camera, well I tried to get it off fast so she couldn't take the picture, but it was hung up on my wrist corsage. The harder I tried to get it off the more I got stuck. 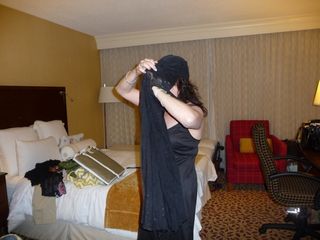 Yes, so attractive. MAMMa had to come to my rescue with tears running down her face from laughing. 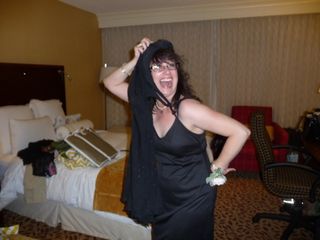 MAMMa finally got my corsage unhooked and I had to smile for the camera, ok really I just look insane, but we were laughing so hard, we thought we were going to pee our panties/spanx, and poor Rhonda is yelling from the bathroom "what am I missing?" Thank goodness MAMMa was there to take pictures…so we could relive it…ha!

So why did I embarass myself by showing these crazy pictures? (if you can't laugh at yourself…right?) Well just to show you that the friendships and the fun times you can have as a Stampin' Up! Demonstrator, and also to save up your pennies and plan to go with me next year for the 25th Annniversary.

OK, this red faced girl is off to bed, have an awesome Tuesday and thanks for stopping in. Hopefully I won't get too many unsubscribes.