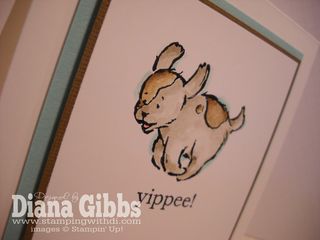 But if this was in Toby's case he would say "yip!" and then he would pee.  He still has that nervous pee problem and we just put him in the bedroom when people come over.  If people are over for a long time, he has to wear a doggie diaper so he can be out with everyone.

So another day of cutting DSP with a quick break for the refrigerator repairman to come.  For I can't tell how long we have not been able to use the ice dispenser in the door so we just have to reach in to get the ice…yeah I know…ugh! Well recently we noticed that there were big globs of ice and Jeff blamed me…why not eh?  So this weekend we got it all cleaned out and defrosted and I thought ok we will start from scratch.  Well I noticed the tray thing that makes the ice was dripping so that was basically making like an icicle and then it drips down the icicle to make frozen clumps.  I mean fairies could have ice skated in there. So I called and they came out to fix it, and you won't even guess who came to fix it?

Edward Cullen, ok well not really, but he looked a little like him and he had the accent and everything. When he was finishing up (it took him like 10 minutes if that – speedy like a vampire too), it went like this.

Me: Do you ever get compared to Edward from Twilight?

Edward: Because of my accent?

Me: Yes, but you look a little like him too.

Me: Well you don't know what you are missing.

Edward: I'm Zimbabwean (or something like that, he talked soft – he was shy like Edward too – and I'm deaf.)

Me: Sorry, I suck at Geography

Edward: Well we will have to order you a new door kit, the office will call to schedule.

Edward: (running to the door with all his tools) No we're good!

So really he is probably thinking I hope they don't send me to this freaks house again. But he really did sound like Edward….ok well not Edward in the movie, but Rob in real life…speaking of life I should get one eh?

So long story short, look at this cute "Storybook" set…we have some awesome sets to be colored this year. Love it! 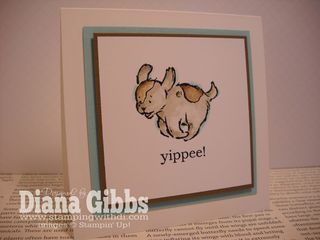 I just thought of something funny, I should have had Edward record my phone message…ha! "You've reached the Cullen Gibbs residence, we've gone out for "a bite" leave a message and we'll call you back!"  OK just kidding. Off the topic now.

Well this old gal better hit the sheets. I had an exciting day, don't ya think?