We had horrible winds and dust today and I looked out and I noticed Gertie kinda huddled down trying to stay out of the wind.  Then she got up and huddled down on the side of the coop, and I just figured she was staying low so the wind was not getting her. So when I went out a bit later, I just let her be cause I knew if I messed with her she would get up and then have to find that spot again.

Now I am second guessing myself.  When I went out there later, the wind was still blowing, not as bad, but she was still laying there so I picked her up and she let me, (in fact when I went to pick her up Fiji pecked my hand, like she was telling me to leave Gertie alone) and she looked at me and she was panting a bit.  So I took her out of the pen and told Jeff I thought something was wrong with her, and he said get her water.  So I laid her down, and then when I came back out, and picked her up she died in my arms. I just don't know what happened.  I hope it is nothing I did. I should have picked her up earlier and maybe she would have been ok?

I know she is just a chicken, (and there are much more sadder and worse things going on in the world) but she was well loved, and I am sad.  Jeff thinks I am being silly, he said it happens they will all die, but he was nice enough to dig a hole so we could bury her, and he checked her twice to make sure she was dead, cause I was afraid that she was just unconsious and would wake up under the ground, but he said no, she was dead. 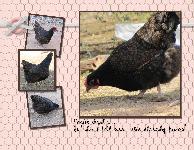 Here's her calendar page, it's October.

Have a nice Sunday, thanks for stopping in, even if is just about the girls.