I had a nail appointment this morning and then I ran over to Office Max to pick up a couple new chairs, and I lucked out as they are having their chair sale.  The ones I wanted they didn't have there (not sure why they have the little tag things you hand in at the register if the inventory is not there?) but the guy said he would go pick them up and I could pick them up in a few hours.  They didn't have the little foot rests so those will be delivered.

I wasted a bit of time, ran into Sam's Club, Joannes, and to Costco for a hotdog, then I thought I would head to Ace Hardware as Jeff's chukars should arrive tomorrow and he needed a grinder and thermometers. Of course I was half way to the hardware store and the guy called and said my chairs were at the store, I was like wow that didn't take long.  So I went to the hardware store and headed back to the Office Max.  I didn't even have time to see Mel, as we were gonna hook up and run to Ulta.

So I got the chairs home and the guys unloaded em. I told Jeff I could barely get them in the back of my truck…he knew better…ha!

I got a great deal on them, and I hope they last a long time.  You know how you read reviews after and hope you did the right thing?  Most of the reviews are really good.  They have like 7 or 8 different adjustments so that is good. All I know is when I sat in it, I went to text my sister Jax (she has back issues too) and the time said 11:11 and that I took as Poppa's sign to get the chairs. Jax said it might take me a bit to get used to them as I will be sitting in a better posture. 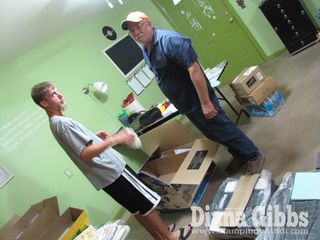 Here's my men so happy to be putting the chairs together. Although they went together pretty quick, oh and this will be TMI (too much information…but hey at least I didn't take a picture…ha!) Jeff has bruises on his backside from the slides at the waterpark.  Eric proudly mooned me to show me he did not have any. I said Dad's butt is older…ha!  Gee how did we get on this topic? 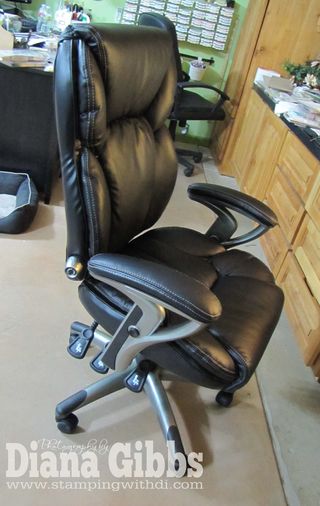 One done, one more to go.  Jax asked me why I needed two chairs and well I have my stamp desk and then my computer desk and I hate wheeling back and forth…I know maybe it's lazy, but to me it makes sense.  I had two before so I just replaced them. Plus when she comes to visit me she will have a nice comfortable chair to sit in right?

OK, so onward and upward to American Idol…to be renamed Jennifer Lopez Idol next year.

Phillip Squared sang first and it was not that bad, I did notice that sometimes the camera would move away from him when he would make his painful face.

Hollie sang second and I could not tell if the song was out of key or she changed it a bit so that was why, but the judges loved it, so it must have been me…right?  I thought tonight she looked like Kelly Ripa.

What is up with Randy's brooches?  I need to make him one and send it in…ha!

Joshua was up next and he sounded totally awesome.

I sure would love to read Steven Tyler's little book of quotes cause he always has something odd or unique to say doesn't he?

Jessica was up next, and I didn't know the song. I loved her oufit and she actually sang with emotion and moved a bit.

Then they did a duet with Josh and Phillip. Hello, didn't they learn from last week's mistake?  Why they don't have boy/girl duets (while they still can) is beyond me.  The guys seem to shout over each other.

Ok, so this is where we turned the TV to Modern Family cause they were going to Disneyland and I wanted to see it, and it was hilarious.  That Phil slays me. Now I know what I looked like coming out of that Space Mission ride, when he got off the Matterhorn, and Al Bundy…he has some of the best lines.

So we missed Phillips second song and whatever they were doing when they were all four on stage on maybe some step thing.

Hollie's second song was amazing and the judges were too hard on her.

Josh was up next and Holy Moly, this had to be the best song he has ever sang and it was perfect for him.  Of course he got a standing ovation…how many has he got from the judges this year? 50?

Jessica was up, and again I didn't know the song, but she did definitely show more emotion.

So then Jennifer was like saying that she had nothing to say after Jessica sang, but yet she jabbered on and on…I was telling Marjori (we were texting…hey chickee) that I bet Jennifer replays the episode each night, not to listen to the Idols again, but to watch herself.

I voted for Hollie, and Josh…and just for Marjori…I voted for Phillip too, cause she said his second song was really good.

Well this old gal is signing off for the night. If the Chukars come in the PO will call really early and I wanna take pictures to show you…well when it gets daylight…ha!