Up bright and early this morning, we had to grab the bus at 7 to go to the Monsters Inc event and then we were going to walk down main street to watch the characters open the park. 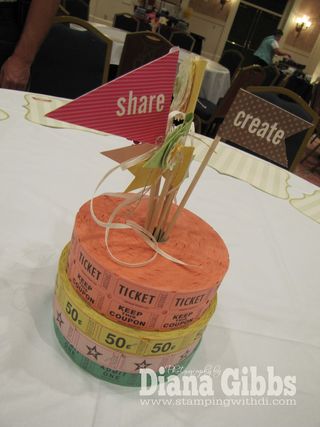 Look at the cute centerpiece on the table at breakfast. 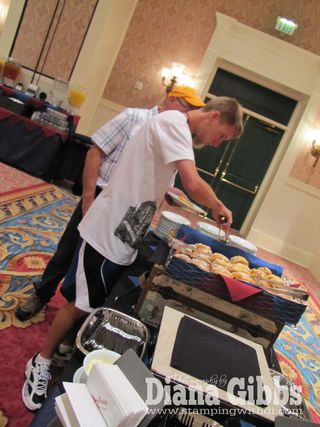 Eric and Jeff partaking of the continental breakfast. 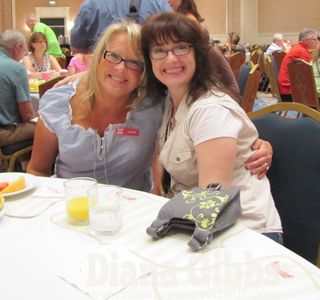 We sat with my sweet friend Wendi Jutkins, I love getting time to spend with her at events and trips. 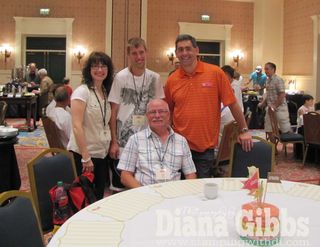 She has a cute hubby too, Rich, who happens to be the President of Stampin' Up! We love him and he is doing an amazing job. 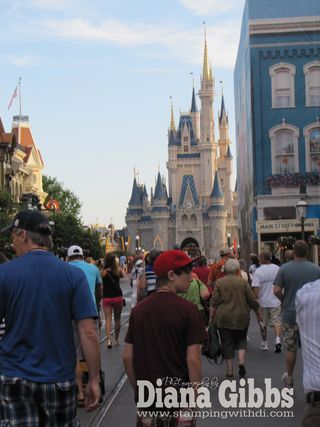 Walking down main street to go to the Monster's Inc. Laugh Floor  Look! It's the castle!! 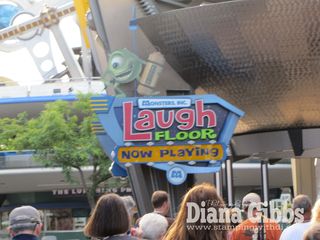 Here we go, our first attraction of this trip! 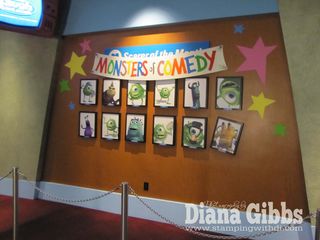 We had to go pick up Eric's hopper tickets so it put us behind our group so we had to wait a bit for the next show. 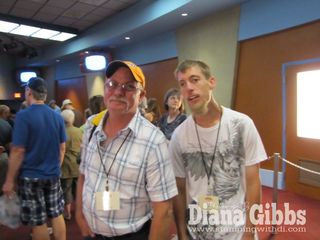 You might see lots of these looks on Eric's face…what another picture??  So when we were at the Monsters Inc show, and I highly recommend it, they interact with the audience so people show up on the screen and they will say funny things about them.  Well they said this one joke and it was like "who stinks?" and then they said "that guy" and it was Jeff!  Too funny, so his face was on the screen.  So the whole time, when they would say "that guy" they would show Jeff, so at the end they were thanking everyone for making the show possible and they showed people they made fun of and then they said "that guy" and showed Jeff again, it was funny.  So they came over and gave him a sticker for his shirt.  It says "I was that guy at Monsters Inc Laugh Floor", hilarious. A few people stopped him later, and thanked him… 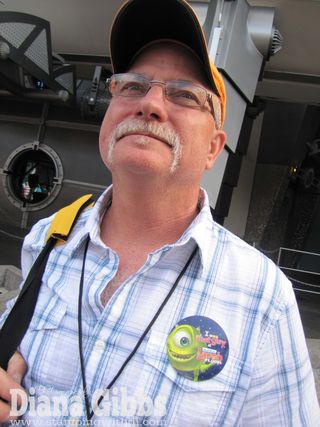 Here he is proudly wearing his sticker.  Doesn't he look like a kid, I don't know who is having more fun Jeff or Eric. 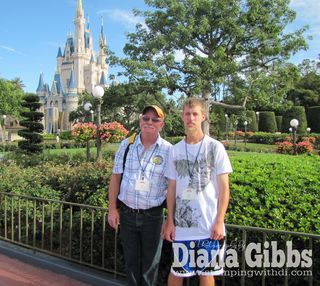 By this face…I think Jeff…ha! 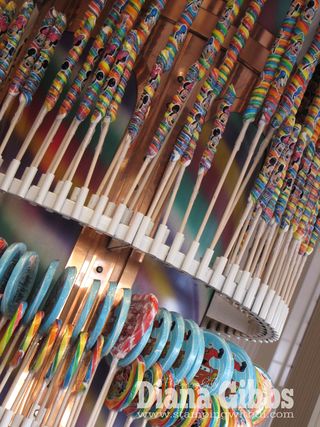 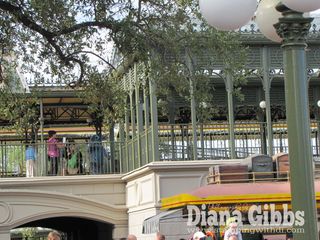 So then we rushed back to see the characters open the park only to have missed it, so I figured we would stay back on this side of the fence, cause I thought they would come down the stairs, but they didn't, we did see some chipmunks and I think that is a Stitch character. 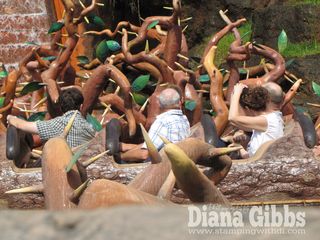 One of the rides the guys went on alone was Splash Mountain.  I had been on Space Mountain (ugh) and A Goofy Rollercoaster (ugh), so a roller coaster with water (I wear glasses and hearing aids) I figured I could  let them have their fun.  This is the only picture I got.  When they got up high, I figured they would come down the water thing next…nope…it took forever, I got tons of other people, but of course when I wasn't ready…swoosh! There they went…oh well. 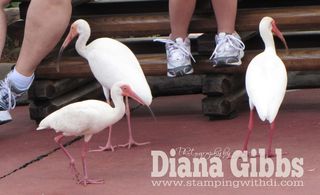 Look at Hewy Dewy and Louey…ok so they aren't but they were wild looking…and real. 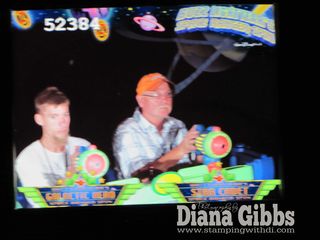 Our second ride after Space Mountain was a Toy Story one and it broke down so they gave us a speed pass to come back…too fun. 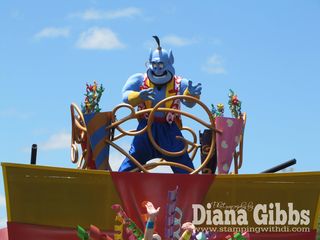 Headed to Epcot they had a float thing going on.  Look it's Grandpa Smurf!!! 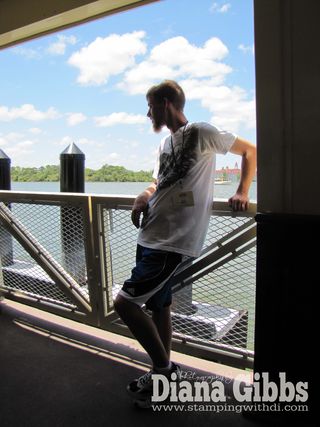 I love this picture, Eric on the ferry to get to the monorail thing. 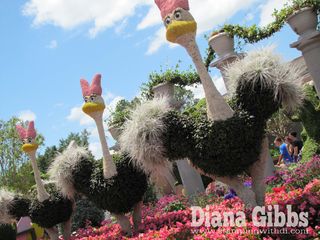 Ostriches made out of plants.  Note to Jeff…hmmm…..what ya think? 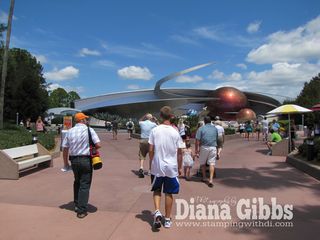 Walking over to some space ride.

So the guys wanted to go on Mission Space and you could get an orange ticket (extreme) or a green ticket(mild) so we got orange, all the time I was thinking I don't know.  So many people walked by with the green one. But there were kids with orange and Jeff said it would be fine. Meanwhile they kept saying if you get motion sickness, or don't like spinning, you might not want to ride with the orange ticket, get a green one, or go directly to the lab.  They must have said it I don't know how many times.  Even when we went to this video room. Gary Senise was talking on the screen and he said it too, and I thought oh Gary wouldn't hurt me, I mean he's Lieutenant Dan.  So as we were standing to get into the ride, right in front of my face there was a screen that kept saying the warning.  Maybe it should have said Diana Gibbs, we know you get motion sickness and don't like spinning…get out now!!! So yeah you know where I am going, I get on the ride, you have to lock your belongings in the tray in front of you. It says don't close your eyes and I am thinking what??? that is what I was going to do.  So it starts and I immediatley am saying to myself, breathe, don't get sick, breathe, don't get sick, OMG! how long is this ride? breathe. I close my eyes, I open them, I told Jeff he would have to push my buttons cause I was not looking. Then I hear my used to be friend Gary Senise say you did it, you made it to Mars, and I am praying that we don't have to ride back to earth, cause I wouldn't make it.  So the ride was over, I was all sweaty, I had to be Going Gray, Basic Gray and a shade of Certainly Celery, and I had tears coming out of my eyes.  That was it for rides for me, I really wanted to go back to the hotel.  It was about 3:30 anyway, and getting hot.

We got back to the room, and I felt better, the guys wanted to go back to Epcot, and I was like go for it.  I even napped.  I napped so good, that I didn't even hear them come in and put the pillow gift on the bed. Eric is too funny and said "good thing you weren't naked!" Yes Eric it is!

Look at the cute pillow gift today, a visor and 4 drink travel mugs. Love it!

So we ordered pizza from Cat Cora's restaurant (it was yummy) and brought it back to the room to eat. We wanted to watch the fireworks from our balcony.

So did Jiminy Cricket…yes folks we had a famous character sharing the firework extravaganza with us. No autographs please. 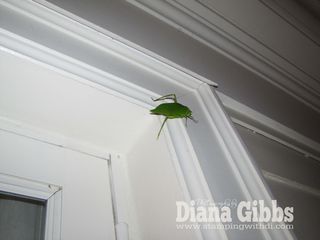 He's a biggin'  I was like what the heck is that?  Jeff was like he's a grasshopper. Yowza! Close the door! 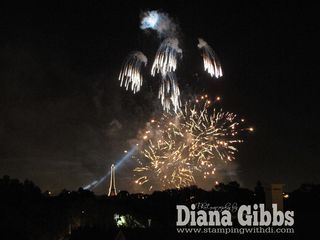 I took a bunch of pictures and some video, I'll upload another time, but this was a good shot I think. We have the best room ever. Thanks Stampin' Up! and thanks to all my customers and downline for helping us get here.

Don't forget you can join my team starting today for only $99.00 and you too can earn amazing vacations for two! Next year is Fiji, not sure where 2014 will take us!!! Wanna join me?

Now I better get to bed, another busy day tomorrow, I think we are going to go to Universal Studios…and believe me if there are any warnings about the rides, this old woman is going to listen and get off that ride…ha! I'm tempted to take a motion sickness pill like I do for the cruises just in case.

Have an awesome Tuesday and thanks for stopping in. – on location Disneyworld, the Happiest Place on Earth (even though there were tons of crying kids today!!)