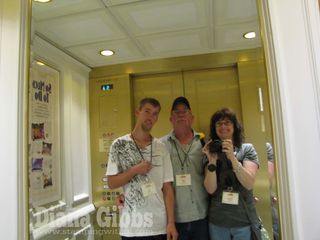 Good morning from the Gibbs' family! Here we are in the elevator headed down for breakfast! Thanks to the mirror in the elevator, we could take our own photo…ha! 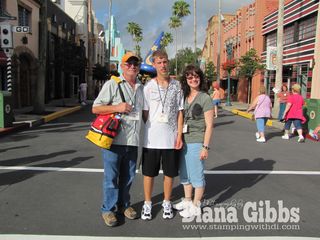 Today we started out at Hollywood Studios.  My left knee is acting up, it started yesterday so last night I even put some roll on type Icy Hot stuff on it, only to get up an hour later and it was ice cold (never did get hot) and hurting, and my leg was all red I had some sort of allergic reaction to it, so I washed my leg really good and by morning it wasn't red anymore.  But it didn't take long walking and it started again, not sure what it is, just feels at time like it is going to stick and I won't be able to bend it. Couldn't be old age and out of shape right? 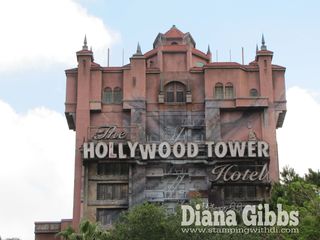 I sat out while the guys went on this, I visited with a really sweet lady, I think her name was Trudy (I am so bad with memory and my bad ears don't help). Her hubby loves this stuff, and she just waits for him.  After yesterday's Mission Space nightmare I did the same thing. 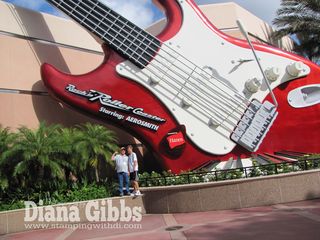 The next ride was the Rockin' Roll Rollercoaster, I also sat this one out, and sat with my new friend Trudy again. The guys loved it. I was almost sick to my stomach just listening to them describe it. 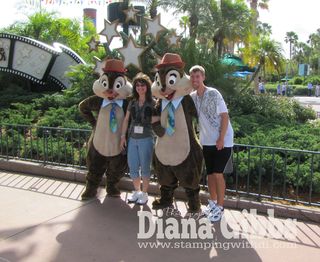 We met up with a couple chipmunks and got our picture taken. Chip or Dale not sure who is who, looked at my badge and I said Stampin' Up! and he started stamping his feet and I said that's the wrong kind of stamping.  They were too cute, kissing my hand, and cheek making big kissing sounds. What a fun job…unless it's 115 degrees and humid as…well you know.

Next was the Toy Story ride. Now this I could ride all day, shooting stuff, and it was just cute. I wish I owned my own 3-d glasses…well I guess I do at home, I'm a little bit sqweemish wearing glasses that other people wore…yeah you know me and my germafobe.  Oh we did do the Bugs Life ride, I didn't take any pictures, it was cool 3-d with things poking you in your seat and the smells and stuff. 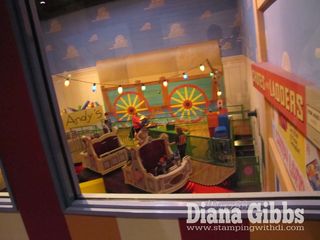 These are the cars we were in for the Toy Story ride, most rides are set up for two people so I usually am by myself and Dad and Eric go in their own car, but this time Eric went in his own car.  Jeff asked Eric if it was ok if he sat with me. 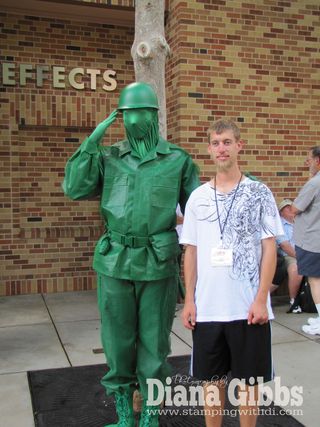 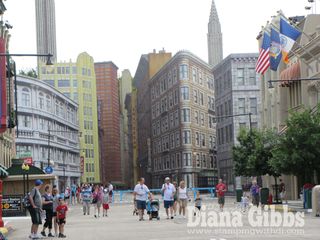 These were neat scenery things.  I can't remember now if the tall buildings were fake like the drawn ones or not. 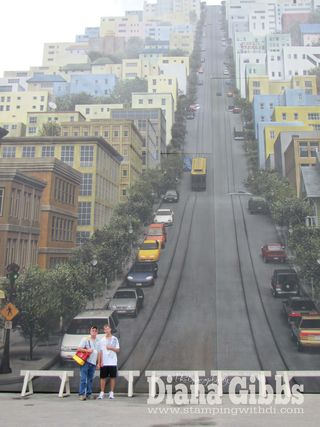 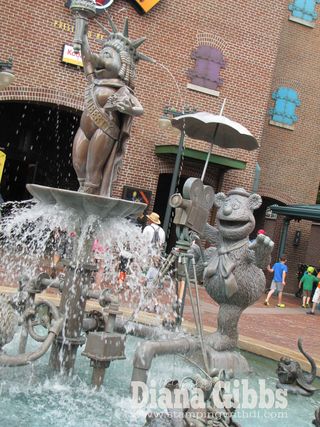 Miss Piggy being videotaped by Fozzie. 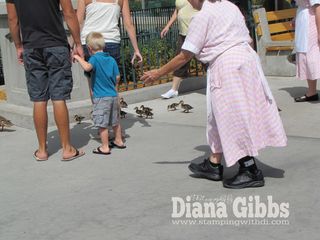 Too cute, outside the 50's Diner the waitresses were helping the Mum duck shoo her babies across the street to the water. 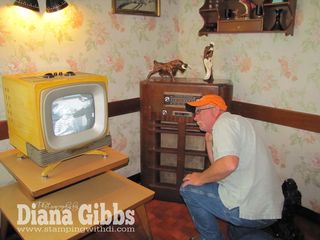 Inside the 50's Diner… we have been lucky, we have not made any reservations, just kinda winged it and we wanted to eat here when we were looking at the book at home but didn't want to have to be anywhere at a particular time, it is vacation after all, so they got us right in. Here is Jeff listening to the cattle prices or something…I remember my Dad doing that at lunch time. 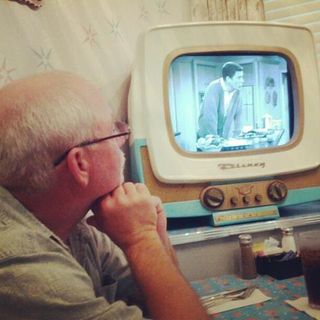 I love this picture of Jeff he didn't know I was taking it. They had a TV at the table and would show clips of old shows. Some I had never heard of "I Married Ruth" I think was one, with Mr. Howell maybe as the hubby. Then "Car 54" didn't remember Herman Munster being on it. They sure don't make shows like that anymore. 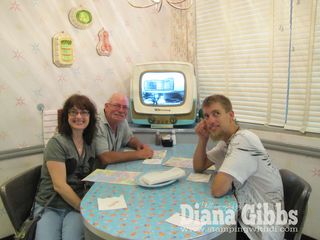 The waitress was fun and took our picture, she said "that's the last time you can put your elbows on the table" and Eric just looked at her and took them off…ha! 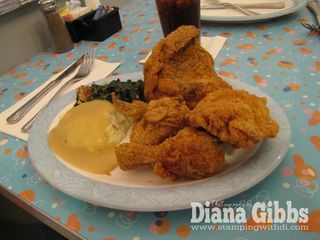 Jeff got the fried chicken, mashed potatoes and gravy and collard greens. He said it was just like his Mum makes. I told him I'd have to get her to tell me her secret, when I tried to do fried chicken one time, it was so dry. 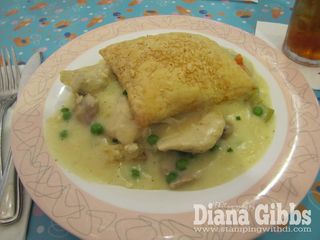 I had the Chicken Pot Pie and sweet tea, oh I could have drank a gallon of that stuff. 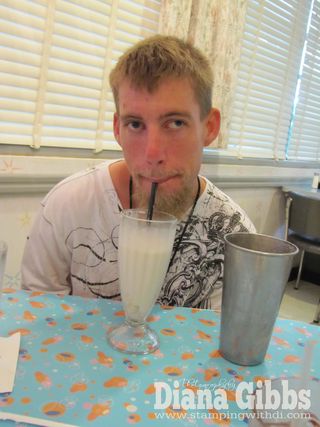 Eric (the skinny one in the family – although when we were his age we were too) was not hungry as we had a big breakfast he just got a Peanut Butter & Jam milkshake. 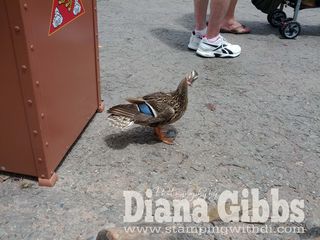 We then headed over to Animal Kingdom, by then my knee was screaming and it was raining off and on.  The guys were on some mountain everest ride so I sat on a rock, and look at the cute duck. He is tilting his head as if to say "What's up Duck?" 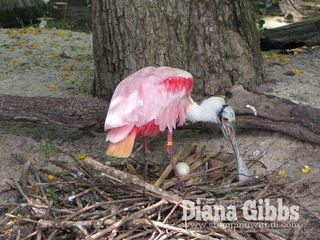 I told the guys I was going to head back to the hotel so they could have fun, as I was heading to the bus I saw this cool bird with her egg in the nest and I video taped it, but will upload it at home as the connection is a little slow in the hotel. It's called a Roseate Spoonbill, and the egg had like a brownish black band of color on it. 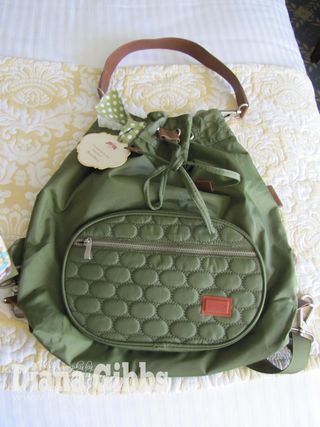 I got back to the room uploaded my pics and laid down for a nap and woke up to find this at the foot of my bed.  I'm gonna nap more often I wake up to gifts, it's like Christmas. Stampin' Up! really spoils us on these trips, they know we work really hard to earn them.  Look at the cute back pack, I love it!  Tomorrow Stampin' Up! is headed to Animal Kingdom so this will be perfect, I am going to take a Naproxan when I get up and hopefully I'll be ok cause I really wanna go back.  The guys did all the crazy rides so they said they would hang out with me. 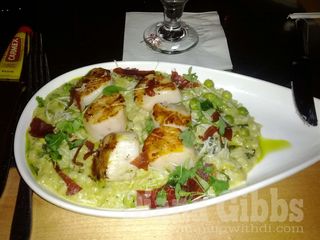 We took my new back pack out to dinner at The Flying Fish Restaurant, again we got in immediately with no reservations. Awesome and the food was delicious.  I had scallops for the first time, I always see them cooked on the Food Network and yum!!! 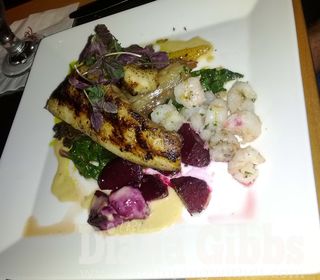 Jeff got Surf & Surf and gosh I can't remember what it was. 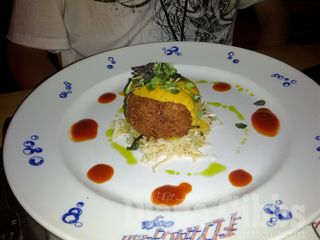 Eric wasn't hungry so we ordered him a crab cake off the appetizer menu and he scarfed it down…not hungry my foot!  He wanted to head back to the room.  Today whooped his butt. Jeff and I walked the boardwalk a bit, he had to pick up razors as they broke in his luggage, I picked up a little gift for my BFF Tracy.  We stopped and had some ice cream and sat outside and ate it. Then up to the room and the guys are snoring as a type. I'm going to read a bit and get some shut eye myself.