Ok, this is very short, I will post more once we get home and I am unpacked and had at least three naps in. I am sure I will be a zombie for a couple days.  The three hour time difference won't help.

Today I lounged, packed, napped, read, napped some more.  The guys used their extra fun pass to go to the water park.  They had a blast, no pictures cause they left the camera here.  But they said their butt hurt from all the sliding.  This trip has been amazing for the whole family, but even more so for the guys. How blessed I was the day I found Stampin' Up! and all it has brought to our family.  Thank you Stampin' Up!

Tonight was the final night and it was even more than I expected, it was at the Indiana Jones Stunt show thing, and they said we would get supper.  So when we got on the bus we were handed this cute satchel. These were all taken by my phone since the camera cord is all packed away. 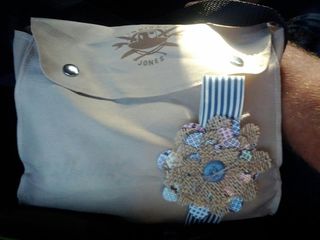 So cute, with the little flower brooche that can be taken off. There was popcorn, candy floss, and a bottle of water inside.  I was like that must be a snack for the show cause that is a funny dinner.

Then we got to the park and they walked us with orange glow stick things to keep us together, and we  walked by "regular" people in line for other rides and I told Jeff "we are special", so then we sat in the stands and the show started and there was the big ball, and fire and spikes and they even had pulled out as extra crew, Demonstrators and Coorporate Team members, and even Rich was part of the show.  Then they talked about stunts and did some things, while the stage split in half and opened up to show a scene from the movie of a town and planes and tanks, and then they started bringing out the tables and chairs.  Hey! here comes supper.  PLUS there were green screens so we could get our pictures taken.  What fun.  I'll post more pictures another day, but these are our scenery shots.  Jeff and I really were hoping to be discovered…ha! They just told us where to stand and what was happening and then we acted…then we went and picked up our pictures and magically we were part of the movie. 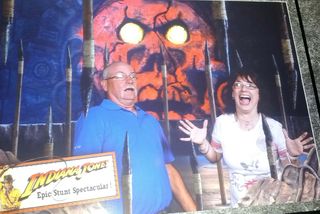 Look out! Spikes! Spikes!  That was close, I wouldn't want to have to explain that piercing! 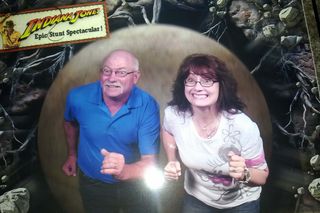 When they said we were gonna have a ball, I guess I didn't realize we would be running from one for our lives!! Although Jeff looks not scared at all. He is my tough guy after all. Plus he knows he can run faster and as the ball squished me he could get away. 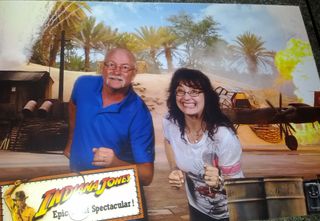 More running, and I don't know what we were running from exactly. 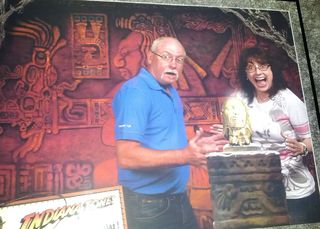 Wow, is that real gold?  Look at how big my mouth is! Yowza!

This was so much fun…ok this old gal has to get some sleep.  Jeff's gotta run luggage out at 5am.