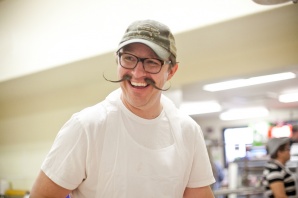 You gotta read the article the paper did on him.  It explains all about his special trademark…the hat…ok just kidding…the 'stache of course.

Oh and next time you are at class and you wanna hear a tune off his CD let me know…it's a good one.  I'm a little partial to the Canadian song.

So I had my Doc appointment today, we're gonna run some tests and rule some things out, so I gotta fast for 12 hours.

So tonight on American Idol the Top 7 (remember they saved Jessica last week so it is still 7) but I think two go home tomorrow?  If you didn't see the show stop reading. They sang two songs tonight. One was a #1 song from 2000 to now and the second was a soul song.

Hollie:  She sang an Adele song and did an amazing job.  She looked beautiful too.

Colton: He sang a Lady Gaga song and he did it pretty good and changed it up.  He had Josie and the Pussycats backing him up as his band.

Elise: She sang an Alicia Keys song, and I so love the timber and growl of her voice, unfortunately the fan blowing her hair and dress kinda forced her to stand in one spot and I like when she walks around.

Phillip: He sang an Usher song, and I didn't know it, but he totally sounded awesome.

Jessica: She sang an Alicia Keys song too. It was another beautifully sang boring performance.

Skylar: She sang a Lady Gaga song and are you sitting down? She has totally turned me around with this performance, she totally owns the stage when she is singing, so I hope Jessica notices that.

Joshua: He sang a Fantasia song, and he did amazing.

Then for the Soul songs.

Hollie: She sang Son of a Preacher Man, and they showed some soccer players talking to her right before she sang, why do they do that? Get them all nervous? She did awesome.

Colton: Sang an Earth Wind and Fire, and I don't know if I knew that song or not cause I did not recognize it. It was not as good as his first song.

Elise: Sang Lets Get It On. I thought the music sounded too loud for her singing, it was a good song for her though. It was not as good as her first one.

Jessica: She actually moved around a bit, but I didn't know song.

Skylar: She sang Heard it From the Grapevine, and boy she was good, she had fun with the guys on stage.

Joshua: Sang a Sam Cooke song and he did an amazing job, it was perfect for him.  I think he got a standing ovation for both his songs tonight.

J-Lo had this strap dress on and I am thinking there was flesh material between the straps or she had some pretty strategically placed sticky strip to keep those straps in the right place, if you know what I mean.

So for voting, it was tough tonight, but I voted for the ones that did both songs great. So that was, Hollie, Skylar and Joshua

It will be interesting to see who goes home tomorrow.

Well this old gal has to get to bed.