Todays card is the Now version from class, ya gotta love ice cream. 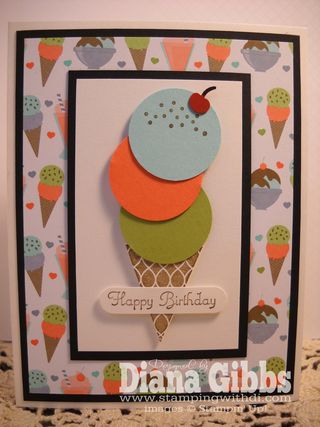 So if you did not watch American Idol, stop reading…cause here I go…

They finally picked an amazing band to play.  Queen, and the Idols sang two songs, the first one was a Queen song picked by the band and then second was a song of their choice.

First up was Jessica, they pulled out all the stops for her to start off the show, she started singing and it was black and white and then as the song got louder the color came. She had sneakers on instead of those high shoes so she could move a bit more, she kicked her leg once.

Skylar was next and this girl has me eating my words, I am really liking her now, and she was so good for her first song, it was twangy Queen.

Joshua was so-so for his first song, I mean I liked it but the mic seemed awkward and some of the words he sang with a little lift at the end, and I didn't care for that, the judges loved it.

Elise was next and this is so her kinda music, she was comfortable singing it, for me, I didn't think she picked the best Queen song as I didn't know this one.

Phillip was up next and he is so painful to watch sing, he is all red faced, veins popping and this song he almost talked more in it than sang.

Hollie was last in this first round and she sounded amazing, and again it was an odd choice of Queen song.

Then they got to sing the songs they wanted to sing.

Jessica was up again and this time they pulled out the fan to blow her dress and hair around, the song was sang beautifully but boring, she sang it for her Dad but still she needs to kick it up a notch.

Skylar was awesome she sang a country song,obviously, with her guitar, and she had a great night. I am looking into my crystal ball and I see her advertising feminine camouflage clothes. You know how they have all the sport jerseys now that are womans styles? Best female tonight.

Joshua was back and Oh. My. Gosh. this was beautiful and I didn't even know the song, and it reminded me of when Fantasia was on and she sat on the stage and sang this hauntingly beautiful song, it was his shining moment I think of the whole season.  Best male tonight.

Elise she picked a perfect song for her, and I can't wait for her record to come out, but I didn't know the song and I think that is not good to do, and J-Lo even called her on it.

Phillip a.k.a. Phillip Squared a.k.a. He is Who He Is.  I didn't know the song, it was odd, it had a fiddle player and a big sax player accompanying him and J-Lo even told him he can't do that this late in the competition playing stuff we don't know and making it all unique and Phillip-ness. Funny moment was after he sang and Ryan mentioned his girlfriend Julianne Hough thinking Phillip was yummy and it showed her off stage goofing off.

Hollie ended out the evening with an amazing song and I really hope she stays.

I voted for Skylar, Joshua, Elise and Hollie.  I think that either Phillip or Jessica goes home…and don't hate me but I hope it's Jessica.