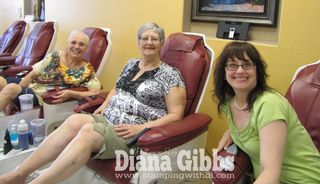 The day I never thought would get here. My Mum and MAMMa finally met!!! It was so much fun to see them together.  They have talked on the phone and emailed back and forth. I think they were destined to meet, things have happened in both their lives that was similar and heck they were born 9 days apart, plus they do have me in common…ha! Poor ladies!!  Perhaps they knew each other in heaven before and came back and met each other again.  You just never know right?

We went for pedicures this morning, Mum could not believe that those were her toes when she was done, she went for the works, french manicure, and even bling! She broke her flipflops so had to wear a pair of mine, she can take home if she wants. 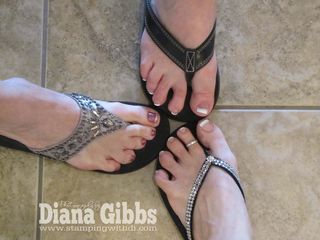 Then we went to the Deli for lunch, Mum and MAMMa drove together from the Salon and I met them there, I told them if my ears burned on the drive over I would know why…so I turned my radio up loud so I couldn't hear them sizzling…ha! 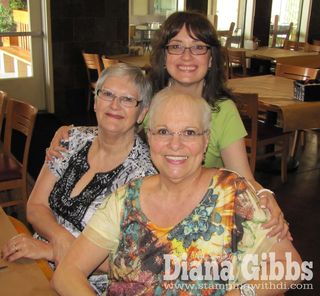 Brandon and Sara are a brother and sister that work at the Deli (I have shown them before) they are originally from Canada, so when I go home I bring them back Kraft Peanut Butter, so when Mum was coming I asked if she would get them each a jar, and then they also asked for some Maple Butter.  So of course the food was amazing, and we will be going back Fri or Sat. Sara didn't work today so I want Mum to meet her, and bend my rubber arm I guess I can eat there again…ha! 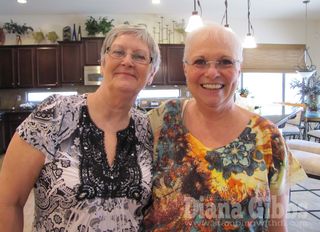 Then we headed over to MAMMa's so Mum could see her house and her stamp room.  We visited for a few hours and then headed home so I could fix supper and so we could watch American Idol.

So with no further ado…here is my 2 cents worth. So like I always say if you have not seen it stop reading.

The songs were from the 80's so I figured we would know all of them.

Deandre – how many times can he flip that hair? sang a song I did not know, half regular and half falsetto. Ugh. Bottom Three…please send him home. I just know I would never buy his record.

Elise – she changed the song up too much and I think it made it harder for her to sing it. She did not do as good as last week. She might be bottom three cause she was not as good this week, but she does not deserve to go home.

They did Duo's this week, the first was Skylar & Colton, and it was just so-so. It looked like Skylar's dress was either camo, or google earth fabric.

Philip Squared was up next and I don't think this was his best night, and it almost looks like he is in pain when he sings. His brother in law accompanied him on stage which I thought was nice and gee what a great time for both of them.

Then Hollie and Deandre did their duo…another so-so performance, but Hollie was dressed like Sandra Dee in Grease.

Joshua was up and he was the best so far tonight, he does amazing when he feels the song.

Jessica who was saying her persona was BB Chez…ok whatever.  She did ok, I guess I want more from her, she is just a little boring, I guess the most excitement I get is holding my breath that she doesn't fall off those crazy high shoes.

The Duo with Elise and Philip were next and these two could not be more different, her with that strong voice and him with that odd unique voice.  It was so-so too

Hollie was up and I loved her dress, and she looked adorable.  She started off a little rough and I blame them for not having the keyboard ready for her, but once she got going she was awesome.  She might be bottom three cause of what the judges said…but she does not deserve to go home.

Jessica and Joshua duo was next, and they had the best one of the night, they complimented each other.

Colton changed his song up but did an awesome job with it and said he stole the arrangement from some band…how sweet to give them a shout out! He almost sounded like he was singing certain words with an accent.

Skylar was last, and I must admit she did an awesome job and looked so adorable.  This was the best song she has done for the season.  I do wish we could hear her sing the 9-5 song though as I think that would have been great.

I voted for: Joshua, Hollie (cause I think the judges were hard on her), Colton & are you sitting down? Skylar.

Well I better get to beddie bye.  I have to pick up our taxes tomorrow, then Mum and I might hit a few antique stores, then I gotta get groceries and get some work done.