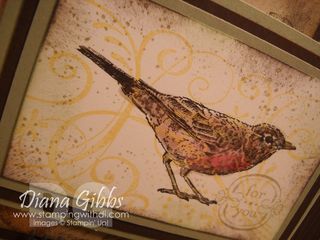 I was finishing up my class stuff for this weekend so I was busy all day. I still have a bunch to do.  I wanted to show the gorgeous birthday card I got from Ellie, and the bird looks so lifelike the way she colored it. 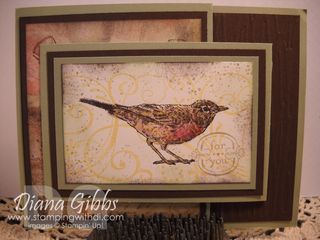 Thanks Ellie, I love it…and you!

Ok, so American Idol, here is my thoughts on the results last night:

I had never heard the first song that the group sang and well it didn't seem like everyone was enjoying singing it, there was a lot of yelling instead of singing.  I wonder who picks these songs anyway?

James Durbin was on the show, he was amazing, and looks so different with that blond hair.  He had said he was going to do something never before done on American Idol and I am not sure what that was? The big sheet he was behind at the beginning, or the funny ball like microphone that made his voice kinda funny?  He was amazing anyway, and loved getting to see the whole band.  I also thought he had a hickey but better looking at it shows lips, and then I googled it and it is his wife's lips. Too cute, we ran into a couple one day I think at the Deli, and I said he had lipstick on his neck and he said it was a tattoo of his wifes lips, but man it really just looked like she had kissed him with lipstick.  It had to have hurt like heck to put it on there…not much fat in your neck.

So they did a bunch of wacky you stand on this side of the stage and you stand on this side. Like they do every year when it gets down to not many left.  I could have sworn Ryan told Hollie to go to the right but she stood on the left.  Hollie was on one side and Elise was on the other.  Eventually the bottom three was Josh, Elise & Jessica.  So they said Josh was safe first…it is a reality show so there has to be drama and suspense (insert eerie music here).  So then I am sure Elise was thinking it was her, but it was Jessica. The judges almost fell off their chairs. I've been saying she is talented and can sing anything, but she is boring, she just sings, and I think to be an American Idol you have to be the whole package, a whole entertainer.  I know whether she wins or not, someone will record her…so anyway back to the show…

….I knew as soon as Jessica got kicked off they would save her, and I knew they would not make her sing and they didn't, they all stormed the stage and Randy was like telling us to vote for the best! Blah! Blah!  Maybe we want to vote for who we want to listen to.

Do you really believe Jessica was in the bottom three? I would love to be a fly on the wall where they tabulate all these.

Plus is it not called American Idol? Are we the viewers, who spend our hard earned money on the CD's, not the ones that are picking who we want to spend that money on?  I think letting the judges save someone should never have been added to the show.  Why do we vote? This apparently was America's choice ( or the odd Canadian here and there that votes too…ha!).  I am anxious to see who goes home next week, cause now if I am not mistaken two people will go home.  Won't it be funny…not ha! ha!, if Jessica goes home next week anyway?

Ok sorry for blabbering on and on about it.

I gotta get back to work.

Have a great Saturday and thanks for stopping in.