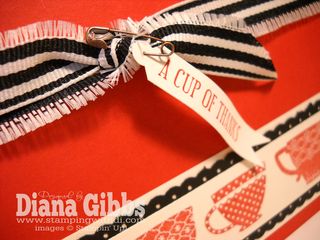 I wanted to show you Gertie's eggs, I love them with the brown polka dots on them.  Sometimes I would love to see what kind of babies they would have if we ever got a rooster, but I have heard that it is not really pleasant for them, so I say why make them not be comfortable just because of my curiosity. 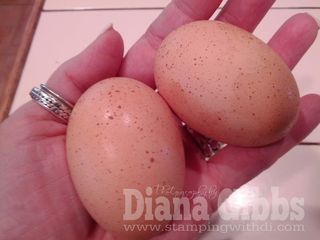 Pretty eh? Oh and did you see I finally updated the egg count for the girls? If you get my blog post in your email box, or through a reader you have to actually go to my blog to see it.  Look over in the left hand column, they are busy girls.

This is another card from a class I did a while ago, it is a case and a tweak of a card from my friend Karen Barber, thanks Karen!! 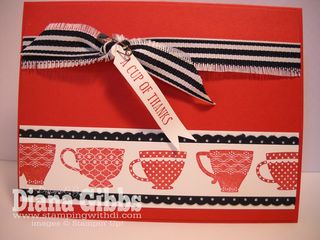 So I got my taxes done, and need to run them to the accountant tomorrow, then run a few errands when I am in town, then get back home. My Mum is coming to visit, and I can hardly wait, so I have lots to get done before she gets here so that I will be able to take some time off when she is here.

So, you didn't think I forgot did you?

My two cents of critiquing from tonight's American Idol…so if you didn't see it yet, please do not read any further…

The Idols got to sing the songs they wanted to sing and Jimmy had his friend Stevie Nicks help him mentor the singers. I love her, want a super star she is eh?  Oh and doesn't Jimmy look sick? He looks so thin.

I loved how the Idols stood on the stage at first and they all were in black, gray and white and they just looked so elegant.

Colton was up first, and I loved how Stevie told him if anyone told him to cut his hair he was to tell them to back off, or something like that.  Unfortunately she was one week too late, as Erika could have used that advice last week.  So Colton sang, and basically he had me with the violins, I am a sucker for them.  I didn't know the song but it didn't matter.  He was # 1 guy tonight.

Skylar was next, and actually she was not bad as this Miranda Lambert song is right up her alley.  She bounces all over the place and its like she can hardly contain herself. I say bottom three.

They did some Trio singing, the first group was Elise, Colton and Phillip, and they were amazing, and sang Stevie Nicks songs.

Heejun sang next and he took it more serious this week and sounded pretty good, I say bottom three.

Hollie was up next, and it was sad when she rehearsed and Stevie talked about her Mum just dieing and she cried, and that made me cry.  Hollie did a pretty good job tonight.

The stage props and lighting is just amazing, I didn't watch Idol way back when, but I don't think they did all this right?

So there was a guy on there (I don't know who he was, cause I am old and this new fangled music I just don't listen to) talking about a song for Coke and he had a broken neck, but he was standing and walking.  I would be scared if that was me. Ryan hinted he might be dating Jordin Sparks cause they were sitting together with Dionne Warwick who was seriously rocking that white hair!!

Then ugh Deandre sang, and I hate when he sings falsetto (I can't even spell falsetto), and he practically sang the whole song that way.  J-Lo even said you don't hear that every day, well dear there is a reason, cause it would get old fast.  I say bottom three. No way will he be American Idol, I am just giving my opinion but who wants to listen to a whole album sang high like that?  Can you say ouch my ears are bleeding?

Jessica was next and I don't know who Sasha Fierce is, I'll have to Google or Pandora her and I think the song Jessica sang will be different, as they said she changed it.  It was great, and I think she was dressed too grown up.

So they had these @signs with the singers names on the screen after they sang, and I don't remember once did they say what those were for.  Again I am old, is that for twitter or something? I thought that was a #sign.

They did more Trio's with Heejun, Deandre and Joshua and they sang Micheal Jackson songs, and not the most popular ones either. In the infamous words of the past judge better known as Simon, it was very karaoke.

Phillip was up, him and that vein in his forehead, my BFF Tracy says she hopes it never pops.  I didn't know the song, but it was perfect for him. He reminds me alot of Joe Cocker.

Joshua was up next and the song was beautiful and his jacket was too small, and no crying Joshua!!! This whole night was an emotional one, and the judges gave standing ovations 5 times I think.

They did another trio of Hollie, Skylar and Jessica and they sang Madonna songs, and again Sylar was bouncing all over the stage, someone start giving this girl decaffeinated coffee.

Elise was the last girl to sing and OMG! she rocked it! She did a Zepplin song and was amazing. She was the #1 girl tonight. I am so glad she got out of the bottom three. She even was wearing the same pants as Steven Tyler.

I voted for Colton, Phillip & Elise.

Well this old gal is off to bed, I stopped reading Game of Thrones (its over 3K pages) the new Black Dagger Book came out and I just had to get it, and it is so good so far, and really I will have it read in no time and be back to the Game of Thrones one.