Sale-a-Bration is here! Free goodies with every $50.00 order. 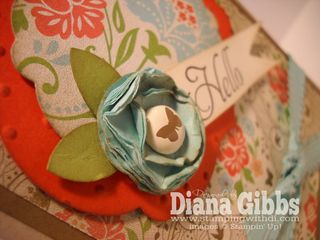 …but not the fun kind.

Today I didn't come into my studio hardly at all.  Instead I did laundry as it has been piling up, and I will admit I am not that bad at doing laundry, but it is the putting it away I am horrible about.  I have been known to wash an item multiple times cause by the time I pull it out of the basket to put it away it is a crumpled mess…and forget ironing, I only use my iron for stamping techniques…or to kill an odd scorpion…ok not really on the scorpion, but it would totally work.

I need to start working on our taxes…which meant I first had to balance checkbooks that have not been balanced in a while.  I have no problem spending money, I hate the balancing part. I never got them all done, so will finish tomorrow…bad Di.

But really both these chores are not bad if I would do them when they needed to be done, and not letting them pile up.  Do you agree?

I thought I would show you a little sneak for tomorrow (see above), it is one of the Spring Fling projects.

I did watch American Idol though, and here is my critiqueing…so if you have not seen it, please don't read any further.

It was girls against the guys which is kinda fun. First general comments, the stage looks pretty fancy with all the wild screens.  I loved the Ford Mustang commercial where the car changed for different people and the little ballerina was the black swan. Randy was very critical of people tonight, and J-Lo could not decide which big blingie ring to wear so she wore both, Steven Tyler's pants were wild, and that nail polish with the black stripe down the center, it always looks fresh and not all chipped up. There sure are some tall people this year, Ryan looks so short beside some of them.

Joshua: I love him, he is so good and he started off the show very nice.

Elise: she did pretty good, and she didn't seem nervous, I think the judges were too hard on her and I think she should have sang the song she wanted to sing originally.

Jermaine: He reminds me of Thurl Bailey, and he seems like such a sweet big kid.

Erika: OMG! Amazing, I think if you look away and listen she sounds like Cher, she is beautiful and I love the little gap in the front of her teeth.

Colton: He sang pretty good and I think he surprised himself. Mary J and Jimmy really helped him.

Shannon: I thought she did fine and she made me cry cause this is a song I remember Whitney singing. I think the judges were too hard on her.

Deandre: Thank goodness he put his hair up, he looks cuter that way. He did pretty good I love reggae music.

Skylar: Looks like Reba and Demi Moore had a baby, I think I said that before.  I am still not sold on this girl, she does have a set of pipes on her, but it's like she needs to learn when to control it.

Heejun: He sounded so soft at first and then he got louder, I loved the notes he gave Jimmy and Mary J. I really could see this guy maybe joining the cast of Big Bang Theory. He is so funny.

Hollie: She totally aced the song. I love her accent.

Jeremy:  He was amazing too, I didn't know the song.

Jessica: Wow, all I can say is I cried, and she sounded as good as Whitney and I think she was smiling down on her.

Phillip Phillips: First why would you name your kid almost the same as your last name? Just saying. Boy he was jammin' and rockin' wasn't he? What a great way to end the show.

I hate that Ryan asks the judges who they think is in trouble, cause now those poor people have to go to bed tonight worrying as if they didn't already worry on their own.  Note to Ryan: don't be a turd.

I voted for: Erika, Hollie, Jessica & Phillip   – all the calls went through but I had to try 5 times to get through for Jessica it was always busy…what does that tell you?

So there ya have it my American Idol critique. What did you think? Who did you vote for?

I am gonna hit the hay.

I'll be back tomorrow to show you the awesome card.

Have a great Thursday and thanks for stopping in.