I forgot I didn't show you all the Spring Fling make n takes.  This one was inspired by my sweet friend Kim Sinclair, you might remember my fun posts from the Alaska cruise when our hubbies and us hung out.  She gave me the cutest box at Leadership so when we were having the girls use the black bauble on their aluminum stake, it comes in this little box, well I figured we can't just let them take home a plain old box right? So we had them decorate it.  They each got the S.W.A.K. stamp for attending so that made it even more fun. 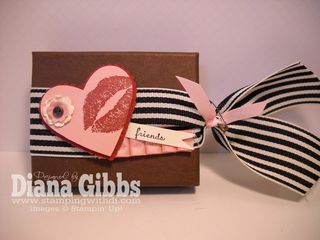 I'll have to look back to see if I have shown everything or not. I think I've still got class cards to show from my last 10/10/20 class too.  If I was smart I would sit down and write a whole bunch of posts at one time.  But I like to do it at night like a journal, unless I am going to be away and then I will do a bunch and set them to post.

The other day I was looking around and I found this fun site, for shabby antique hunters like myself it is fun, it reminds me a little of pinterest.  It is called My Favorite Find.  Maybe you'll find something you've been looking for.

So I have my pantry and laundry shelf almost done, I will take a picture tomorrow and post it.  I was watching American Idol or I would have gotten it done tonight.

So here is my two cents…for whatever it's worth…oh so if you have taped it and have not watched it yet, you may want to not read this…can't say I didn't warn ya.

So tonight the Idols sang Billy Idol (OMG! Thanks Tandra, you caught me…what a dork I am…it was Bily Joel songs!!! Ha! ) songs and Tommy Hilfiger is going to be helping the Idols with their fashion and I guess figuring out who they wanna be.

Deandre: OMG! Tommy had to mention his hair so he was flinging it all night long as he danced all over the stage. I did not like the song. Bottom 3

Erika: Holy Moly Batman, did we change the channel and Pat Benatar is singing?  I guessed she would have dark hair (they teased us at the beginning and didn't show her), but wow, my vote is still out on the shortness of it, and it was sure slicked back, I think I would have left it longer and shaggier, and I would have the ends be wild color, like before, I love the black though.  Jeff would kill me if I cut my hair short like that. He likes my hair long…not like he plays with it, but that is his preferance. She sounded pretty good.

Joshua:  He seemed pitchy at first and then he finally got into it.

Skylar: the screamer…blech.  Her outfit was horrible and so was the song.  Bottom 3

Elise: When she was practicing it looked like she had a dead cat on her head.  She sounded amazing, with a bit of Adele kinda thrown in there. Loved it!

Phillip: Loved how he stuck with he is who he is. Tommy said don't wear gray, and Jimmy and Diddy said don't use guitar. He wore gray and played the guitar.  Yay! Philip!

Hollie:  She had a few odd notes tonight, it was not as good as other times. They did not dress her younger and what was up with making her stand on that platform the whole time, that is probably why she didn't sing that good, I think she was afraid of breaking her neck.

Heejun: What a goofball.  I still say Big Bang Theory need to snag this guy cause he'll probably be voted off soon. He was pitchy but at least he sang louder. Bottom 3

Jessica: I did not know the song, and she sang amazing. It looked like she had no shoes on but that she was on her tippy toes.  She was the #1 girl tonight.

Colton: Wearing his Interview with a Vampire kinda coat. He did amazing!! I am so glad he mentioned God.  I guess the producers of American Idol or someone was telling him to tone down his religion. I say they need to stay true to who they are and what they believe in and it will make them stronger as people, performers, and everything that comes with success. He was the #1 guy tonight.

I have a party tomorrow so I will have to keep taking pee breaks to go see what is going on, since we don't have a tape machine.

Here's a few tidbits more of my opinion.

P Diddy, Puff Daddy, Mo Diddy, Diddy Daddy, Dumbledore Diddy…so they are asking this guys opinion on helping the Idols decide who they wanna be, and this guy has had more names than Prince.

Tommy Hillfiger, they are asking this guy for fashion tips, and almost to the end of the show there was a Macy's ad for his clothes, and it was a guy wearing a seer sucker coat and a pair of shorts that looked like my Granny's patchwork quilt. Are you kidding me? If I went to the store in something like that, they'd call for a straight jacket…hopefully it wouldn't clash! Ha!

Well there ya have it, what did you think about tonight? Don't be shy!