Thanks for all the sweet comments the last few days it means so much to me.  Jeff had his procedure done today and he was so funny when he was still kinda drugged up…he kept saying "pull my finger" and when he would…you know…then the nurse would clap.  Ha!! He wanted to go to Denny's right after for a burger and the nurse was like that might not be the first thing you eat on an empty stomach, so I talked him into letting me fix him something at home.

Jeff and our neighbor Jim are having their annual horseshoe tournament this coming weekend and they always make some sort of trophey. This year they figured they want to try doing it as a mold. 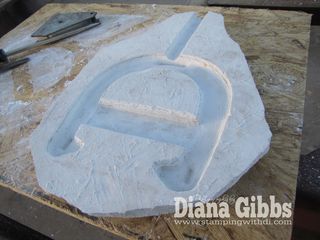 So they made up this plaster mold of a horshoe with this line across it that would say first place blah, blah, then they had to cook it or something to get it really dry. 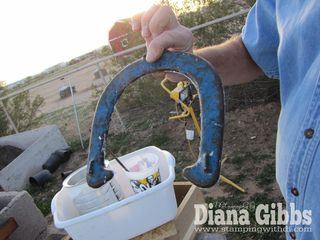 This is the horseshoe they used to make the mold…as Jeff was showing it to me, I looked at the cup in the background and said "is that my cup" and he said "yeah, you don't have to take a picture." 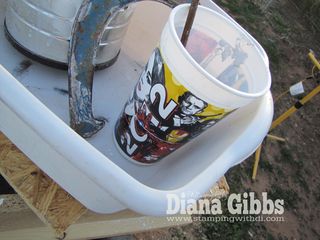 I said "that's my 2012 Harkins cup, it's barely February! You couldn't have used the 2011 one?"  He said "I needed a cup and just grabbed the first one, and I can wash it out"  Well I do believe I'll be buying me a new one…I don't care how good he washes it out.  Would you like a little plaster with your root beer? No thanks I'm trying to quit…that would put a whole new meaning to getting plastered. 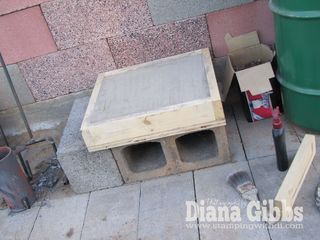 He showed me this box full of sand cause that is what they tried the first time to do the mold and it didn't work. 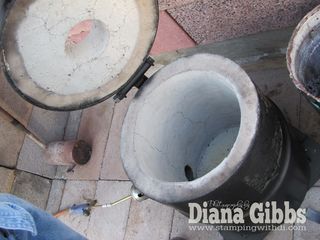 I think this is where he said they melt the aluminum that gets poured into the mold, it is so scientific and science was not my cup of tea. 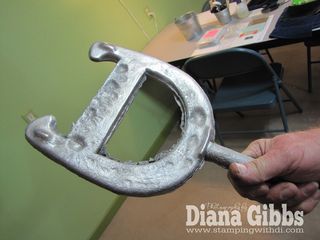 So this is after the mold was poured and it was cooled.  It didn't work. He said the mold still had some moisture in it and that is what the pits are from.  Although those end things that go around the horseshoe peg turned our really good.

I forget what he said they are going to do instead.  I don't think they have given up on the whole mold thing, but not for the trophey.

Well I am gonna say night night, I just got back from Rhonda's shoebox swap, I carpool with MAMMa and I didn't even go in and chat with her like I usually do so I could get home and maybe get an hour of cutting paper done before I go to bed. It's only 11 pm.

Oh and did anyone watch that "Smash" show? Was it good? Is it worth trying to find it online to watch?