…will break my heart if they really make us wait another year for part two.

So Friday was a whirlwind day, I got up early, put on my new "outfit" and then threw on a sweater cause it was cold…ha!

I got to MAMMa's and then Jenn arrived and off we went.  MAMMa had got tickets for 7 of us months ago, and we were all excited for the day to get here…well Mandy (the brat) went at midnight the night before and I think she saw it twice, so she stood us up, she was tired!! Hmmpfff!  Then Shannon somehow was not getting the emails that were going back and forth (she answered an original email with her phone and that was the email Marlene had and she does not check those…I hate that, cause it happens to me too sometimes) so Shannon totally forgot and met us afterwards to get her ticket to trade in for another day, so we have a date when she gets back in town to go see it again…I mean what are friends for right? Yes bend my arm I will go see it again!

So here is a few pictures of the day…before I talk about the movie….without telling anything about it…

MAMMa and I…OMG! Look how fat my face is, that is not good! Look at MAMMa's cute hat, it says Forks, WA someone went there and brought it back for her.

I had made everyone a card and I also found these fun vampire lip suckers, in fact I was with Melissa when I found them.  I had to open up three different packages of them in order to get enough vampire teeth in purple.  There were only a few in red so purple was the way we had to go…I got the red ones too…you will see in a minute… This was a riot, I handed them out in the theater, who knew what the people around us thought…"boy what a bunch of freaks", or I like to think they thought…"I wish I could hang out with those cool chicks!!!" I had to show this picture cause I did not notice till I uploaded the pictures that Jenn had her teeth in upside down. 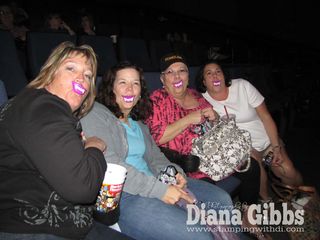 Here everyone has their teeth in…right side up!

After the movie Mel had to go home but the rest of us went to the Deli. When I was there earlier in the week with Mari I had asked Brandon (our cutie patootie waiter) if they could possibly have the soup for Friday be French Onion, and he said he didn't know.  But guess what? We got there and they had made French Onion soup! Yeah.  They knew we had requested it. Yummmmy!!!

After the Deli we all headed home to watch Ellen as the cast was going to be on there. Thank goodness the transformer blew as Bruno Mars was singing and not when the cast was talking.

So my thoughts of the movie, and totally email me if you went to see it, cause I am not going to spoil it by saying much here…except…

…I totally predicted the way it was going to end. I love when that happens.  They did an awesome job with Bella's special effects.  The honeymoon…wah!wah!wah! (say it like Chachi from Happy Days!)

Did you see the special guest at the wedding?

There were quite a few parts that had us laughing. I have noticed that in the last couple movies, and I love that about it. Who knew the Volturi were so funny.

Make sure you stay till after the credits, a ton of people left the theater and missed it.  We made sure to tell the girls waiting in line when we got out of the theater to wait.

I really hope that they will show Part 2 before a year.  I was reading online somewhere and they were explaining why, cause the Summer movie schedule was so busy…blah!blah!blah! I say then put it out the month before or after, don't make it be a year, and don't freaking turn it into 3-D. What don't they think they will make money?  Ridiculous! I think.

Oh the red vampire sucker teeth, I got three of them for the Gibbs' nuts…here ya go…my crazy family…

Eric could hardly hold it in his mouth cause he kept laughing.

So last night while we had no power we sat out with the girls. We also moved Fiji's mini coop-er over by the other girls coop so hopefully that will help them get used to each other. 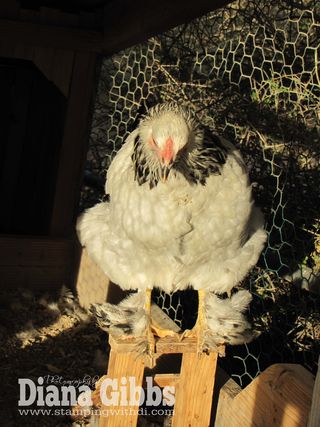 I love this one, the way her feathers look, she is so soft she is silky.  She is actually looking down cause I had her door open and she flies down and follows me to the other yard.

Here's the girls eating their scratch. See Clara (the golden comet) I think she has her eye on Fiji.

Clara is the boss it seems and she is the one that usually chases Fiji, but they were all chasing each other last night.  But this time Clara started after her and then she stopped and went back to the food I think she realized…hey that white chicken aint so small anymore….ha!

Our neighbor's son Micheal brought over some grubs from the compost pile for them and they went hog wild for them…those had to be the ugliest bugs…and the chickens would kinda peck and fling them and black stuff was flying, I was about sick it was so gross, but they loved it.

Well I am going to sign off, I have to set up for class in the morning, the guys are headed back home.  Eric's old highschool football team almost made it to the finals, they had to win today to go to Flagstaff next weekend for the last game, but they lost.  I bet the kids are sad, but Jeff is kinda happy cause now he won't have to drive to Flagstaff next weekend.

See you back here tomorrow for the big…