I wasn't really, although my friend Amir said it looked like that as Jacqui posted food pics on Facebook, but you know how it is…ya gotta eat and when you go back home you want your old die hard food.

I was good and only had one Tim Horton's Iced Cap compared to one a day like other trips.  We tried out a place in Markham called Frankie Tomatto's and it was delicious, it was an Italian buffet.

…fries, brown gravy and cheese curds, life can't get any better….oh and also… 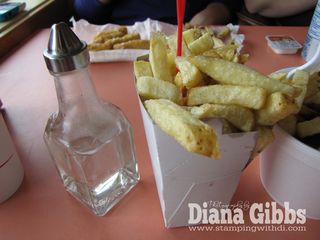 For breakfast we had stopped at Cora's, this was a new place for me, Jacqui said they had crepes and I wanted to try one to compare with the ones I make. 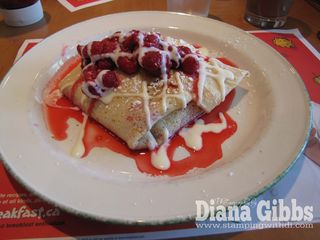 Mine was raspberry, filled with cream cheese, and a sauce and then icing sugar, after it came I realized this was not too smart for breakfast, as it was super sweet. 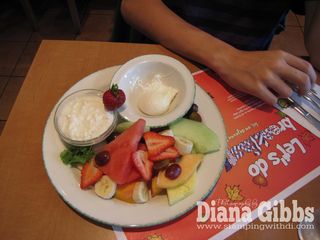 Joel got fruit and dip, and then an egg with toast. – Yeah eat healthy ya skinny youngun!!

Jade got a healthy helping of lots of goodness.

Jacqui got eggs benedict and stuff.  All the meals were enough for two people and the place was packed, it is just open for breakfast and lunch.

I went and got my crown fixed today, I guess I thought they would just repair it and I would be on my merry way, so I took Jeff with me cause we were gonna go to the Deli after (I had picked up some Kraft Crunchy Peanut butter for our favorite waiter and waitress at the Deli – a brother and sister from Canada…that is what they requested when I asked). Well my appointment took two hours as they actually totally removed it and drilled some and added a new one…poor Jeff, he walked around Home Depot a bit and wasted time.

I made sure to take a break and watched the season finale of True Blood on HBOGo, oh my it was a good one.

Then I had to pack.  Can't wait to see all my fellow Founder's Circle girls, will be getting up bright and early tomorrow to head to Utah, the guys will be bachelor-ing it again this week.  Think they'll miss me or just get sick of my travels?

I'll post once I get to St. George. If you have sent me an email give me a few days to catch up, I'll try to answer from St. George, I had no time before I left.