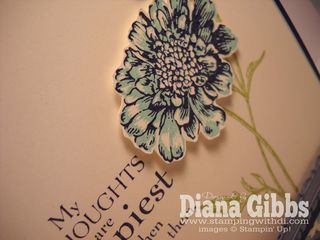 So I got a sales ad and it seems Justin Bieber who is what 12? has a perfume? What the heck? I guess it must be for the young girls, cause it just seems weird that he would have a perfume, maybe an acne cream but perfume?

Another observation, I was watching a cooking show the other day and she had questions from viewers that she was watching on a video and it showed the lady at home with her kid in a high chair and she had made spaghetti and she said "I have no marinara", so then the cooking show host said she would show her what to do, so she gets olive oil or something and garlic and onions and probably some other spices, and I was thinking oh what is she going to do? Use tomato soup? tomato paste? tomatoes from the garden? ketchup? Nope after she got all the stuff browned and cooked she said now add a jar of spaghetti sauce…and I am thinking huh? Didn't she say she didn't have marinara?  I ain't Italian but wouldn't spaghetti sauce work for marinara? Would the kid in the highchair be like "gee Mummy this is just spaghetti sauce from the jar where is the marinara?" Cause I am thinking this woman had no sauce at all in the house right?  I mean if she is having to go to the store to get spaghetti sauce to make this quick marinara, why not just pick up marinara…help me if I am wrong, slap me if you wanna, but I was like ok maybe I don't need to watch this particular cooking show…give me Guy Ferrari…he's good!

In fact I had that Dives and Diners show on and they did this french toast where they dipped it in crunched up frosted flakes (or was it just plain corn flakes?) before they grilled it, and then she put this cream cheese sugar jam concoction in the center and drizzled it with some more fruit, I am drooling all over my keyboard thinking of it.  I am totally going to try it but want to find the recipe online first.

So this card looks similar to my FLICKs card but this was the card I did for my downline meeting swap, I cased a card by Ilina Crouse, I just changed the colors…thanks Ilina.  The girls that were coming didn't earn the FLICKs card so I figured I could change it a bit and it would be fine, I just love these colors together.

I have had a couple questions on where to find my Fork Bow Tutorial, that was way back in 2008.  Here is that post.

I had the girls running around in the side yard tonight, it has been a while since I had them out it is so hot all day long, but we let them out close to dusk so they only ran around a while before they headed back to roost.  I also let Fiji run around in the back yard, I figured I got to get her used to knowing to stay and she totally follows me around anyway, she is too cute.  I did carry her over and hold her and show her to the other girls, and they all stood really still and just looked at her, I don't think they were impressed. I didn't want to hold her too long cause of her poop issue, I am hoping as she gets older she will have more control, I have never been pooped on by any of the other girls when I have held them, but they have not set on my knee all comfortable like either.

I would really like to put up a fence all around the coop and make it so nothing can dig under it, plus I would like it totally covered so nothing can get in and it keeps the girls in but gives them running around room, and make it tall enough we can walk around in there.  Jeff says "people in h.e.double hockey sticks want ice water"…he said that the day after he almost had heat stroke working on Fiji's new pen.  Maybe in the winter we can think about it. Right honey?

Here is the pen so far…

Here I am sneaking up on Jeff working away. 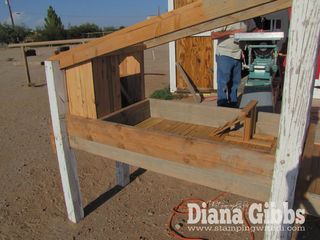 Here's a side view.

Here's a front view and the little roost he made, hoping it is strong enough for when she is bigger, I think she might get like 9 pounds.  You can see where she will go lay her eggs back through the hole. I am crossing my fingers I can put them all together eventually. In the nice new fenced in yard.

Here's how we will collect the eggs, he is making it a sliding door. He's getting all fancy on me. He says he should have it done in a week or so.

Well I better get my butt to bed.  Have an awesome Tuesday and thanks so much for stopping in.