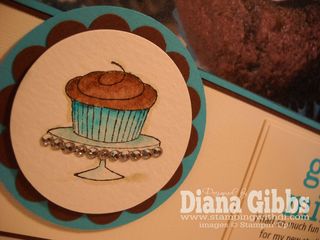 Maybe it is called Cupcake Wars, I'm not sure but it is a fun show with different teams and it gets whittled down to two that compete to make a display and like a thousand cupcakes in I don't know how long, an hour or some crazy time, but I often wonder if it is really timed or not, cause they always JUST get the last cupcake on the display as the clock ticks down. I don't think I have ever seen anyone not do it.  Plus I don't see how the displays get done in the time alloted either.  But still it's fun, and that one foreign judge guy with the accent "I just don't like eeet", he says.

One of Jeff's old army buddies came to visit today, they have not seen each other in a long long time, so it was fun to see Jeff so excited, and to hear some of the stories, I was busy getting ready for my downline meeting tomorow so I was in my studio while they were in the house.  We did go out to dinner to Trophy's Steakhouse….yum! That is always a nice treat. Why didn't we go to The Deli you ask?  Ummm, they are closed for vacation or that is where we would have went, and we would have run into Mandy…hey chick!!!

This is another of the displays I did for convention.  When Stampin' Up! asks for display help they usually want so many scrapbook pages, so many cards, and so many 3-D.  This new set Easy Events had a cupcake image in it and I didn't have any birthday pictures to scrap, but I did have some fun cupcake pictures from when I had my Studio remodel kick off party, so I used them…or I should say it. I only ended up using one picture. I think this is a 6×6 or 8×8 page.

Misc: Rhinestones, Circle punches, Circle scallop…I can't remember (sorry, I need to write these down before I send my stuff to SU!) I may have used a circle die as well.

Buy Three Get One Free!

Well I got more stuff to do for my meeting tomorrow, so I better git!