At convention there are so many emotions going on, there is excitement, anticipation, nervousness, sleeplessness, happiness, and yes even sadness.  This year my BFF Tracy did not go to Convention and so it felt weird not having her there.  She was sad in PA not being there, and I was sad in UT not having her there.  One night after our extra class that Kristen and I did, we were the only ones from our group that got into it.  The rest of our group that didn't get into it went to the mall and stuff, so when I got back to my room after carrying all the stuff we got my arms were killing me.  I stuck my head in Lynda & Jacque's room and they were all sitting in the dark watching the Workshop WOW DVD on someone's laptop.  Well I knew I wouldn't be able to hear it, so I told them to let me know when they were done.

Well then I did a bad thing alone in my room…hey get your mind out of the gutter!!! I got my jammies on and turned on the TV, and 20/20 or something was on and they were talking about the book "The Help" and OMG! I watched some of the interviews and I sat there sobbing, I mean ugly crying where tears were streaming down my face and I was making noises when I cried.  I am sure a lot of it was being tired but I know most of it was not having my BFF there with me, cause we are pretty much inseparable when we are together, so I was missing her cause she would have been there to hug, and dang it, I probably wouldn't have had the danged old TV on anyway…ha!  So anyway, I just had to share that, cause really the friendships I have made since joining Stampin' Up! are priceless, NOT tearless, but definitely priceless.

If you want to come to convention next year and bawl like a baby with me, then you definitely don't want to miss the $99.00 starter kit special.  I would love to have you join my team.  I've got girls all over the US, and they are the best too! Come on, I'll bring the kleenex!

So today I felt almost human (I am still coughing as if I was a smoker, I have lots of rattling going on and that has never happened to me in all my…well…over 40 + years).  I should maybe get some mucinex or something.

I got my FLICKs cards done and I will show you that tomorrow or so.  I was late on them cause of convention and then being sick but they will go out in the mail tomorrow.

Then my window pane was screaming to be done.  I did shabby paint it up the other day, I think I told you that, if not…I just did.

So I put some of the Beau Chateau DSP in the back of the window panes. 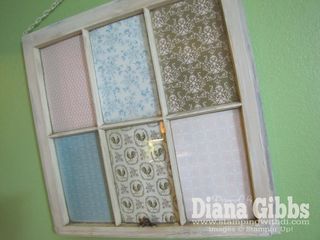 Jeff added some chain to it (the same chain he used on my chandelier) and hung it on a stud…he says he is the stud, but he also found one in the wall. This way I can take it down and change out the papers once in a while, like I will put Christmas paper in it for Valentines…ha! just kidding, I was just seeing if you were reading or just looking. 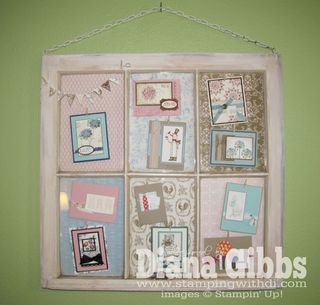 Then I added some cards for display…cute eh?  I have them stuck on with removable tape but I also put a little clothespin on them so it looks like the clothespin is holding the card on.  I also made a little banner. 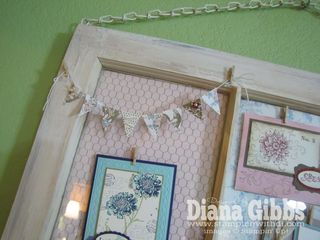 It needed something in the corner, I just used the new Pennant punch and decorated it simple like with some pearls, and flowers, and buttons. It is held on with the mini clothepins too. I used the Beau Chateau paper for the pennants too.

I found a cute saying in one of the Hostess sets "Faith in Nature" and I just used part of it so the banner reads "beautiful things".  I think it turned out adorable.  Even Jeff really liked it.

*some of the cards on the window pane I have posted on my blog already and some I have not as they were swaps, and I certainly can.

*I am reading "The Help" on my Nook and love it and can't put it down, but I have to as I have lots of work to catch up on.

*No worries (but I am loving your sweet comments), I got plenty of hugs when Marlene came back to our room and she brought Rhonda, and they noticed my red eyes and they hugged this old blubber butt good.

*oh and the BFF, she has already told me she won't be missing another Convention.

Well I better say nightie night and clean up my room.

Tomorrow I need to get cracking on Fall Fest stuff, we are sold out! I am so excited!!!

Previous Post: « July Thank You Cards – Hot Off The Presses
Next Post: FLICKs for June – Better Late Then Never »