…well I think Feedblitz is having a glitch somewhere as someone emailed me last week saying she got my feedblitz blog thing twice.  Then today I got my own twice. So I apologize I don't know what is up with them. I guess twice is better then none.

First of the summer yucky critters and hopefully the last, look away if you don't like snakes…

I'll move it down a bit….so you can quick not have to look at it… 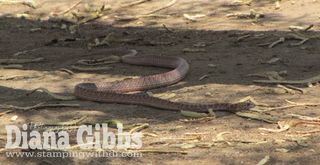 This guy was in the backyard the other day underneath the picnic table, I was washing the dishes and I looked out and was like "what the heck?" so I got my camera, turned it on, got the zoom all the way out, and then went out to the back porch and took the picture. As soon as he saw me he got out of the yard so fast.  I am pretty sure it is a red coach whip snake, and I guess if I have to have a snake (Jeff says it is one of the pleasures of living in the desert), I would rather that kind.  They eat the prairie dogs that are digging holes eveywhere, and they also kill rattle snakes that I definitely don't want.  Last year we had a black coach whip and the prairie dogs were not near as bad.

So while I was cutting paper, I had on the Barefoot Contessa, and she was BBQing chicken on the beach and they were all bundled up, and I was thinking…wouldn't the chicken be full of sand?  If you are bundled up on the beach, isn't it too cold to be at the beach? Just sayin'!

Look at the dust storm that went through the valley tonight, it was amazing. We really need some rain to knock down the dust.

One of the little things I did for convention is make a fun little notebook and it is just a staples little book with like a clear plastic cover, and I took the spiral off, and took it apart to put a new cover on it, put the plastic back and the spiral back, and voila'. Way cuter, don't you think?  I found some little pens too.  I made up a couple for some special peeps.

Well I am gonna call it a night, and turn in.  I got a nail appointment tomorrow, gotta get my fingers all purty for convention and then back to cut paper for my class this weekend.  I am still scratching my head going "why did I book a class the weekend before I leave for convention?" Ha!  I am a glutton for punishment I guess.

Have an awesome Wednesday and thanks so much for stopping in.