I'm still waiting on pictures from Kim while I type this up, if I get them before I post I will add them, if not I'll do them another time.  She is a very busy girl. I was a dork and didn't toss the little point and shoot in my purse and I didn't want to carry my big girl camera around all the time.  Since we could not have our phones on I didn't even have my precious to take pictures with. Next year I will be better cause Eric will be there.

These are just some people pictures I took on the cruise, and I was so bad and did not take too many, I guess I was enjoying myself too much. They are not in any particular order, my darned old computer keeps not letting me open all the files at once, and then it wants to start them at the earliest photo which is like 2004 or something…grrr..

I did steal this one from my sweet friend Frenchie and her friend Glenda. (Frenchie said she would charge me a lot for the photo) This is us out on the deck drinking hot chocolate (and some of the girls – I won't say who) had Baileys in theirs. Look at me all bundled up with gloves on and a scarf and Frenchie does not even have a coat on. The ship took some fun photos too, but it drives me nuts, they are $20.00 a piece and they are all 8×10, now how many photos do you want 8×10?  I say print them 4×6 and I bet people buy more pictures, otherwise they just shred them, now how sensible is that?

I did find this one that Kim posted on her blog, this is Kim, Meg and I and Sarah Palin. Sarah seemed a little stiff. I think she felt bad she didn't have a matching coats and purses like we did, oh yeah and rings…eh sistahs?

This is Deke Wood & Jeff. Deke is Susie's hubby and we were all table mates, and the guys hit it off, as they had farming in common (well Jeff grew up on a farm). We had a great table we also sat with Craig & Mary Anne Grimmer. I met her at Founder's circle and she is such a sweetie.

Here is Susie, Deke & Jeff walking along the river on the dock, headed to town, we dressed too warm and I didn't think we were ever gonna get there.  But on the way  back I was glad to have my coat…and we took a cab. 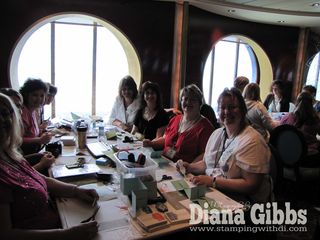 Make n take time!! I am not sure who the two ladies are on this end, but from left to right (hiding) is Meg, Tiffany, Susie, Kim, me and Lee Ann 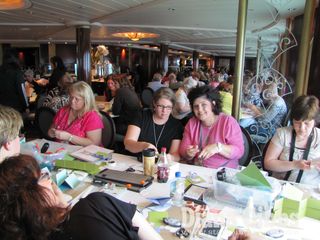 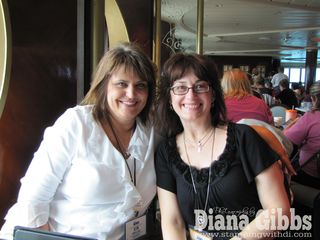 Kim & I.  She is so sweet and I am glad I got to know her better, we had to leave our BFF's on land, so we were just pretend BFF's at sea. 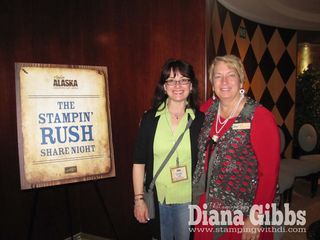 Here is Pam Morgan and I. She is such a cutie!

There were so many great ideas at the share night and I loved Rolanda Patton's awesome idea with making your own cell phone covers.  Isn't she adorable?

This is Shanna and I, she is Shelli's youngest daughter and the sweetest thing ever.  I told you about our Salmon bake that we were so excited for.  Well we got a notice to add half an hour to our departure, so I was thinking half an hour earlier.  So we got there and got on the bus and chatted away with the bus driver, and no one else came.  So then the bus driver says lets go.  So we take off and are not far up the road and the guy on the walkie talkie says "I got a couple more salmon bakers for you" so we turned around and went back and who was standing there but Shanna and Jared ( her hubby of just over a year or so).  So they felt bad and they had thought the notice meant half an hour later.  But it didn't matter, we headed on up to the place and talked a bit in the bus while the bus driver went on and on and I couldn't make out a word he was saying.  Shanna and Jared wanted to check out the waterfalls and they said they would find us when they came back, and they did. So we all sat together and we gabbed and got to know each other pretty good.  She had such fun family stories to tell us (that I swore I wouldn't share…just kidding), and she said she can't wait to meet Eric next year.

A couple days later we saw Shelli in the hall and she said "did you do an excursion with Shanna?" and we said yes, and she said "when she said she sat with Diana from Arizona, I knew just who you were".  Hmmmm….I hope that's a good thing.  Jeff told Shelli that Shanna made us feel young again. 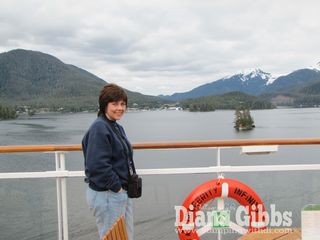 Here's Susie looking over the deck, I think we were pulling out of Ketchikan. I loved spending time with Susie, as I told you before we are part of Robin Merriman's GoDiva stampers, so it was nice that I already knew her a bit before we got there. 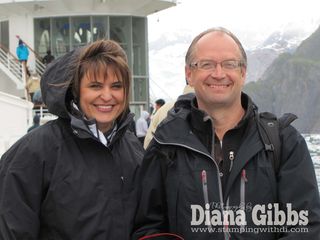 Here's Kim & Brad going through the Tracy Arm Fjord, they are so much fun, and I am so glad they went on the cruise. We didn't do tons with them cause they had different excursions then us, heck one day we never saw them at all. 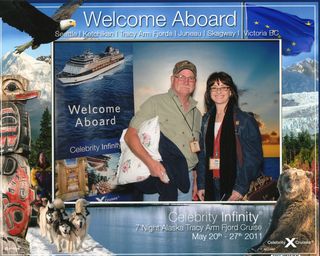 All Aboard!  Oh wait is that a train?  Bon Voyage maybe, anyway this is us, and Jeff hates it cause he is carrying his pillow, he kept trying to tell people it was mine, even put on a flowered pillow case, gee some people eh?  Ok, it's mine, but he was carrying it in the photo…ha! I wish we had of put everything down, but by this time after waiting in lines and lugging stuff around we just wanted to get on board, find our friends and eat.

This is our first formal night, and I guess we clean up pretty good eh? Jeff left his pillow in the cabin…ha! 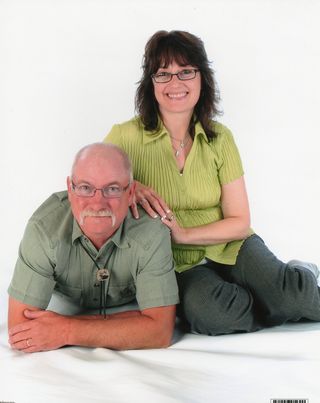 This was fun and if they had of printed smaller ones I would have bought more, we were laughing so hard, and the photographer was australian or something, so he was like (say this like Keith Urban talks) "ma'am get on your husband and straddle his bum" well excuse me but usually when I do that it is in a dark room without my friends pointing and laughing at me. We finally settled on this one not the straddling of the bum one. 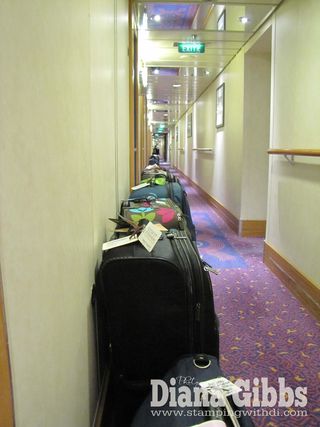 I always like to take a picture of the luggage outside in the hall, this has to be the worst part of the trip.  We have to have our luggage out by 11:00pm and so you are trying to figure out what you need the next morning, and you need to keep that and so you need a small piece of luggage to put that in. I remember our first cruise I packed all my bras, so the next morning, I had no bra, and I was like OMG! So I tried to camouflage myself, not that I'm Dolly Parton but still.  This time I didn't find out till that morning when I went to wash my hair that Jeff had packed my conditioner and left me his shampoo instead, seems that he had been washing his hair the whole time with my conditioner.  So his hair was silky soft and I had no idea that conditioner stops your hair from being all staticy…I was a mess in the plane, my hair was flying all over the place.

Well that should do it for me tonight, and I will get back to regular stamping stuff tomorrow.