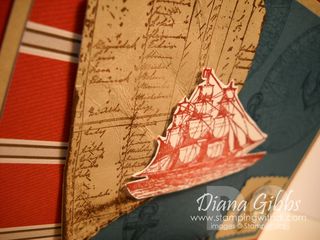 On the cruise Stampin' Up! surprised us about three weeks before the trip with an email saying who we were going to sit with at supper. At first I was like what? We had planned to sit with Kim & Brad.  But then I saw I knew the two girls so I was like cool.  We sat with Susie Wood & Mary Anne Grimmer and their hubbys. A couple times Kim and Brad did come sit with us when Mary Anne & her hubby had other dinner plans.  So I had every intention to stamp something for Susie & Mary Anne to give them…did I get it done? Nope, time got away from me.

But Mary Anne surprised Susie and I and gave us a few swaps so I want to show you one of them today.

Isn't it cool? I love how she used the new postage stamp punch to put the little compass in it.

Today I was a stamping fool and got a bunch of display stuff done.  As I was stamping I could hear this noise in the laundry room, (Jeff's Dad is here and I thought he might be in there looking for chips, but it kept happening every few minutes) and then I would go in and listen and it would happen again, it seemed like it was the chest freezer, and I was thinking crap, I don't want to buy a new one.  So I pulled it out from the wall and there was a sock near the motor dealie and I removed that.  It was still making that noise, so I called Jeff at work and he said he would check it when he got home.

I was envisioning it sparking and going up in flames some day we were not home. So I got online and checked and I guess this is normal if your fridge has automatic defrosting.  Well ours gets automatically defrosted when I bang the ice off the side with the rock I keep in there (thanks Emily for that tip), so I knew it was not that.  About half an hour later, I went in there and thought, I should take the frozen jug out to the girls, and when I picked it up guess what? It made that noise that I had been hearing.  I guess the ice was cracking in the water jug.  I mean the danged jug was huge and ice was on the edges and frozen down the sides, even though I had emptied it some.  So that was the noise I was hearing, it must have been echoing in the freezer for me to hear it outside of the freezer.  I just saved us $600.00

As I was making some of my display stuff it seems like I like the next card better, sometimes it takes me a bit to get on a roll.  So as I would finish one I was like wow I like that one better then the other one. Then I got to thinking thank goodness we only had one kid. Can you imagine?  Oh look Marcia it's your new sister Jan isn't she cute?  Wow we did much better on her then we did you, practice makes perfect you know.  Then of course little Cindy comes along and she is perfection. See I would have been a horrible Mum of multiple kids. Plus if I ended up being a widow and having to marry that widower down the road with those three boys, what a mess that would be?  But then we would have a maid called Alice instead of a chicken…ha!

Well I got more stamping to do.

Have an awesome Thursday and thanks so much for stopping in.